I've ridden you since January of 2014, when I received my volunteer training. 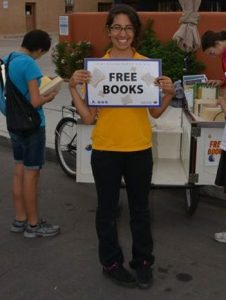 Back then, I would assist Cassy to stops at the Ronstadt Transit Center. Then I became a Bike Ambassador in August of 2014, when I was able to ride you to various stops. I've taken you to the Casitas on Broadway, multiple Cyclovias, the Tucson Festival of Books, Casa Maria Soup Kitchen, MegaMania, the Santa Cruz River Farmer's Market, El Rio Health, Downtown Parade of Lights, Children's Museum Tucson, BroFest, and perhaps a few more stops that I do not recall at the moment. Bookbike, you've even been on the Sun Link Streetcar with me from the UA to Joel D. Valdez Main Library when we had a volunteer mix-up during the 2016 Tucson Festival of Books!

I've seen the color transformation, from orange and white to brilliant hues of blue, and your new latches, your new signage, your new seats, your new handlebar tape—you're practically brand new again!

I have fond memories of that one time, when we made it all the way to Quincie Douglas Library's Recyclo-rama. A 10 mile roundtrip adventure, since a lot of clever routing made the journey longer than if I were on my regular bike. I didn't even have a volunteer with me, so Karen rode with me there and another librarian rode with me back. I pedaled away with a load heavier than what I had brought, since they donated so many books for me to bring back to Joel D. Valdez Main Library!

Now that I think about it, that day and the rides to Jacobs' Park were super long days that left me with sore legs. As of this year, I've ridden your siblings over at Santa Rosa Library and Eckstrom-Columbus Library a number of times to new locations. But Main Library Bookbike, you still remain near and dear to my heart, even though you are a little rough to ride and not quite as smooth as the others.

It was August 15, 2015 when I first took you to Analog Hour. We continue to reunite for this every month. In fact, I just went this past weekend, so here's to nearly three years of that event!

Until the next ride,

Listen to Mely read her love letter on Arizona Public Media's Arizona Spotlight. A huge thank you to AZPM's Mark McLemore for turning the written word into the spoken word for this project.

Love Letters to My Library is a collaborative project between Pima County Public Library and Rachel Miller of Love Letters to Tucson. Has the Library helped or changed you in some way? Does a particular location, service, or program hold a special place in your heart? Please tell us about it. Submit your Love Letter today to library.news@pima.gov.