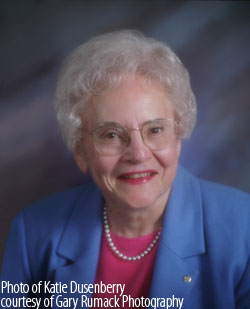 The Dusenberry-River Library, which opened in January 1991, was the 17th library in the Pima County Public Library system.

The library is named after Kathryn "Katie" Norton Dusenberry, a long-time Tucson resident and business owner who served on the Tucson Unified School Board. Dusenberry was the first woman elected to the Pima County Board of Supervisors in 1976.

Dusenberry and her husband, Bruce E. Dusenberry, own Horizon Moving Systems, Inc. together with their son, Bruce L. Dusenberry. She and her husband worked together in the business until their retirement in 1997. Dusenberry served on the Tucson Unified School Board for 11 years in the mid-60s to the mid-70s. She was elected to the Pima County Board of Supervisors for two terms from 1977 to 1985. She served 8 years on the Federal Council on Aging as an appointee of President Ronald Reagan, and she was appointed by Arizona governors to serve on the Arizona Arts Commission and the Arizona Department of Transportation Board from 1997 to 2002.