In January 2009, the Sahuarita Library opened as an express branch. This location was housed in a portable unit and was 2,000 sq. ft. 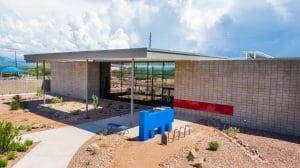 The new Sahuarita Library at 670 W. Sahuarita Road opened to the public on Tuesday, September 7, 2021. The 17,700 square foot library features a Storytime room with rainbow lights, stuffed animals, and lower windows for outside views, a gaming room, reading patios, private study rooms, and a large meeting room for programming. The library also has an outdoor performance space, generously funded by The Pima Library Foundation. The space was the first of its kind in the library system and will be a community gathering space for movies, concerts, story hours, poetry readings, art workshops, gardening classes, and much more! See photos on Flickr.

The library was constructed for universal access by Line and Space, an architectural company known for its energy-conscious buildings that blur the lines between inside and outside. Line and Space was recently awarded a Best Regional Project prize, opens a new window by ENR Southwest for the new library.

The design has a simple façade for the main, north-facing entrance, but as a rock with crystals, the back of the library (seen from Sahuarita Rd) features two glassed spaces that project out from the building. By day, the towers provide natural light and views of the Santa Rita Mountains. At night, the glass towers appear almost like beacons welcoming people in. The building materials and landscaping represent Sahuarita’s history of mining and agriculture.

The Library also features public art by Chris Aranda of Aranda/Lasch, a New York and Tucson-based design studio that has exhibited internationally in galleries, museums, design fairs, and biennials.