This week I am reviewing the Buena Vista Social Club DVD, and also reminding everyone how awesome the Freegal service is. 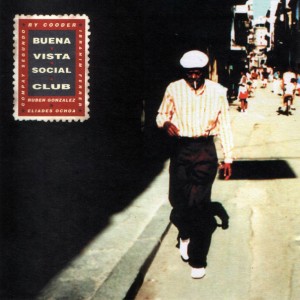 Buena Vista Social Club is a documentary that came out in 1999 about Ry Cooder and his quest to re-unite musicians in Havana, Cuba. While it is not a new film, it is so good, you should undoubtedly see it if you have not, and probably watch it again if you have already seen it years ago. The music, the characters, the story are all wonderful and affirming. When I worked as security at the live venue/movie theater The Boulder Theater in Colorado, we showed this movie about ten times in the first year I was there. It always brought out a crowd, and everyone, myself included always enjoyed the film. The band members in the film actually played a show at the theater the week before I started, and for the first several years of my employment there, I heard over and over again about the incredibleness of the performance.

I want to also express my sincere satisfaction with our music service, Freegal. If you have not done so, link over to the site and start downloading. They have new recordings, older recordings, and often have some of the more obscure stuff I am looking for (they have recordings by one of my favorite funk bands called Lettuce). You are allowed five downloads a week, and they easily end up in your iTunes collection. If there are multiple people in your household, you can get five downloads per library card, so go ahead and take full advantage!

PCPL also has copies of the Buena Vista Social Club CD, and I'd argue that you haven't heard a love song until you've heard Ibrahim Ferrer sing "Dos Gardenias."