This article by Library Associates Caitlin Burns and Wayne Wheeler was originally published in the Arizona Daily Star on Oct. 25, 2014.

The Pima County Public Library was one of the first library systems in the country to have an LGBT committee that also had the full support from library administrators to provide library resources and services to the LGBT community. As the co-chairs of the library’s LGBT Services Committee this year, we interviewed each other to find out why being a part of this committee is importan 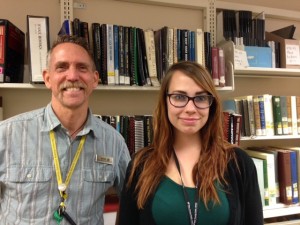 Caitlin: Where are you from and how did you end up working at the library?
Wayne: I‘m originally from Tucson and once I received my Masters in Library Science, my goal was to work for our public library system. I met my husband in 1990 and then landed a Librarian position at the Nogales-Santa Cruz County Public Library. I worked there for almost two years before moving to Scranton, Pennsylvania. That’s where my husband’s family lives.

Caitlin: So when did you come back to
Wayne: We moved back to Tucson in the fall of 2011. After landing a part-time position with the library as a computer instructor, I was eventually hired full-time as a Library Associate this past June.

Caitlin: Did you know that we had an LGBT Services
Wayne: The LGBT Committee at PCPL has a national reputation, so I was aware of it back in Pennsylvania. When I began working here, one of my first goals was to get involved with the committee. And given what the committee has accomplished throughout the years, I was excited to become a co-chair with you.

Caitlin: What do you like about working here?
Wayne: Pima County in general has a long tradition of friendliness and openness to the LGBT community, and I really believe that the library and the committee have helped contribute to that climate.

When people ask me about working at the library and being involved with the LGBT Services Committee, there’s really not enough good stuff I can say. It’s very rewarding for me to go to work and know that what I’m doing is directly helping people in my community and positively impacting their lives. Being able to do that is why I wanted to work at PCPL in the first place. And being part of an organization that I know values and respects me for who and what I am...Well, you can’t beat that!

How did you become interested in the LGBT Services Committee?

Caitlin: I've been working for the library for nine years, and earned my Master’s degree in library science two years ago. But I was raised in a Quaker household and surrounded by people who taught me about compassion and tolerance. The adults I grew up around advocated for equality regardless of sexual orientation, nationality, ethnicity, gender, or socioeconomic background. At the library I’m able to extend my personal commitments to my work by serving the needs of diverse communities every day. I'm proud to work for an open-minded and evolving employer.

Wayne: How’s your first year on the committee been so far?
Caitlin: I organized this year’s Author Talk at Fluxx Gallery with Stephen Snyder-Hill, and I loved working with Steve and his husband, Josh. Steve was a U.S. Army Captain deployed in Iraq when he recorded a YouTube video of himself asking Republican presidential candidates if they supported President Obama's repeal of “Don't Ask Don't Tell.” His video was shown at the 2011 Republican presidential primary in Florida, and was booed by the audience on national television. He had served in the military for over 20 years,

Wayne: What do you remember most about Steve’s author talk event?
Caitlin: I have Steve’s book, Soldier of Change, and I remember just how touched each member of the audience was by his speech. Because of him and so many others, LGBT matters are being discussed more openly.

Wayne: What else do you like about working on the committee?
Caitlin: For LGBT History month, we organized Rainbow Storytimes at several libraries to provide opportunities for families of all kinds to learn and read together. Staff members also ride the Bookbike to the Eon Lounge, which used to be a part of Wingspan. We work directly with LGBT youth there, let them pick free books, and do craft activities with them, too.

Richard DiRusso, manager of the library’s Collection Development Office, was involved in getting the LGBT Services Committee started in 1997. “The time was right,” Rich told us. “And PCPL embraced us from the start.”

That pretty much says it all.

Wayne Wheeler is a Library Associate at the Joel D. Valdez Main Library and has been a librarian for over 20 years. He’s been with his husband for over 24 years, and understands the importance of reaching out to marginalized populations.