Adol Lual has been in Tucson since February 10, 2006, arriving with five sons 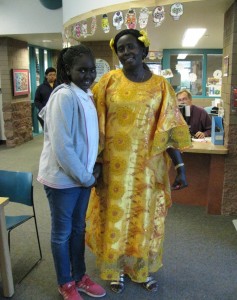 and one daughter from the town of Bor in South Sudan, where the most recent war has taken place since 1983. She shares that life there was very hard. "In South Sudan no clothes, no food, no school; nothing in the village," says Adol. "Now, I go to school, I work, my children go to school."

With one child enrolled at a local elementary school, two children attending a local high school, two more attending Pima College and one attending university out of state, Adol spends long hours working as a housekeeper in a luxury resort to support her family. Although co-workers and supervisors used various visual techniques to train Adol in her duties, there was no way for Adol to communicate concerns or questions she had because she did not speak English.

This began to change the day Adol's youngest child visited the Santa Rosa Branch library, and one of the librarians mentioned that the library hosted English classes, opens a new window free of charge two evenings per week. Adol immediately registered for the class, and has attended regularly since 2012. Remembering back she says, "On the first day I did not know any English, not even the ABCs."

Denise Eddows, the Literacy Connects English Language Acquisition for Adults (ELAA) tutor who taught Adol for a number of years at Santa Rosa library, opens a new window, recalls teaching lessons on job-related vocabulary, and shares that it was not long before Adol was able to ask questions and explain to her boss exactly what was wrong with a room.