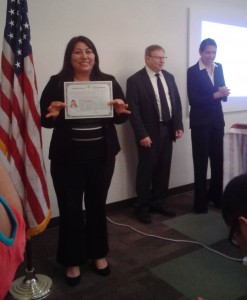 The rain didn’t stop twenty-one young people from the Dominican Republic, Mexico, India, the Philippines, Brazil, Iraq, Pakistan, Ethiopia and South Sudan and their families as they waited outside the Eckstrom-Columbus Library on Friday, January 30, 2015 for their chance to take the Oath of Allegiance and receive their certificate of citizenship from the United States Citizenship and Immigration Services. The new citizens were accompanied by their parents and other family members for this momentous occasion. After the new citizens took the Oath of Allegiance, all present joined them in singing the national anthem.

After the ceremony, new citizens shared their plans and stories. A young man from South Sudan spoke on behalf of his brothers and sisters to thank their single mother and their aunt, who wore beautiful African dresses for the occasion, for bringing them to this country and struggling to make a good life for them. Three teenagers from Mexico stood up to thank their mother for all she has done on their behalf. One young man spoke of his plans to join the Marines and another plans to join the Army.

If you or anyone you know is interested in becoming a US citizen, check out our citizenship classes, offered at several library branches in partnership with Pima Community College Adult Education. You might also be interested in learning more about English classes for adults, which we present in partnership with Literacy Connects. We also keep up a handy list of library resources for new immigrants and refugees.