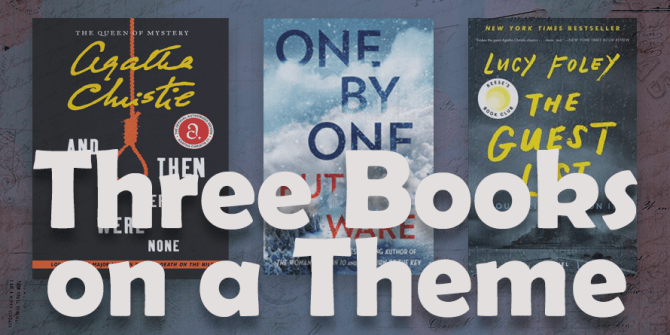 There is something both sinister and menacing about a murder mystery set on a location so remote or inaccessible that the characters don’t have detectives, forensics, or medical help to fall back on. The characters must rely on their own wits and ingenuity to make it out alive, often as the social norms crumble and characters become more and more hostile in response to their ever-mounting fear. Unable to make contact with the outside world, that level of isolation heightens the tension for both the readers and the characters. Particularly in the modern era, when we are so used to being in contact with anyone and everyone we need, the idea that you might find yourself stranded with no way to call for help, ensures that these mysterious are not just brain teasing whodunits but bone chilling and creepy reads. Each of these books features a murder mystery set in a remote location, from out-of-the-way islands to snowed in ski resorts.

And Then There Were None

Ten strangers are lured to a remote island. When a mysterious recording accuses each one of them of having gotten away with murder, they begin to wonder if they’ll ever make it off the island alive as the bodies begin to pile up.

Written by the Queen of Crime of herself, And Then There Were None is a classic of this sub-genre. Originally published in 1939, its influence can be seen in many thrillers and mysteries still being written and filmed today. Atmospheric and tense, the story does an exceptional job of building the suspense as the cast of characters shrink.

The employees and founders of a tech start-up arrive at a high-end ski resort in the French Alps. The future of the company needs to be decided on, and tension and tempers are already running high, when one of the founders goes missing on the ski slopes. An accident or something more sinister? When an avalanche cuts the resort off from the rest of the world, the survivors will have to survive both the elements and each other to make it out alive.

One By One does a brilliant job of setting the scene, teasing out each character, and slowly building the suspense towards a frightening and climatic third act. Told through the perspective of two female protagonists, each with their own unique voice, the book does a wonderful job of presenting well-written and believable characters. A definite page-turner, this is one of those books that’s hard to put down once you’ve started it.

A wedding on a remote Irish island turns tragic when a body is discovered during the reception. Jumping back and forth narratively between the reception and the events leading up to the wedding, you are introduced to each character, their relationships, and the sinister undercurrents that lurk between them all. Not only are you trying to deduce which of them is a killer…but who is the victim?

The setting is gorgeous, with the Irish scenery, bogs, graveyards, and a gathering storm. Foley’s characters are nuanced, with a great deal of heart, and each with a secret they wish to protect. It’s an engrossing read, as you keep your eyes peeled for clues.