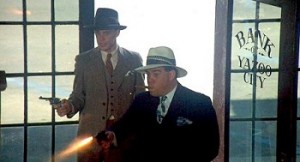 The story of Thieves Like Us is an adaptation of Nicholas Ray's They Live By Night ('49), but Robert Altman's style and purpose couldn't be more different from that darkly romantic work. Here the outlaws are portrayed as brutal, ignorant, and amoral, and the film has an overall tone of deadpan social comedy. By limiting the characters' psychological horizon to a minimum prescribed by the 1930s American cultural atmosphere, the director achieves a sort of tragicomic determinism. These guys rob banks because they don't know how to do anything else very well, and society doesn't really offer them any other way to get ahead.

One of Altman's primary devices is to showcase the omnipresence of radio, particularly radio drama, as a counterpoint to the action. Radio was the TV of that era, and the crooks are constantly listening to crime and adventure shows on their car radio. The melodramatic stories and pretentiously high-flown speech of the announcers on these programs form a delicious contrast with the crude, inarticulate ways in which the real people in the movie actually communicate. It's a vantage point on that era that had rarely been explored on film: the ambivalent relationship between the common people in the Depression and the messages they were getting from the media.

Although bitterly funny at times, the picture also creates a somber mood that is very affecting. Altman is adept at using long shots to emphasize the characters' smallness. One bank robbery sequence is shot completely from an overhead angle, which conveys with remarkable clarity the criminals' emotional detachment. The excellent screenplay, never faltering in its commitment to a loose, non-dramatic approach, is by Joan Tewkesbury and Calder Willingham, with help from Altman. The film failed to find an audience at the time of its release. Perhaps its hope-free vision was just too strong for people to take.