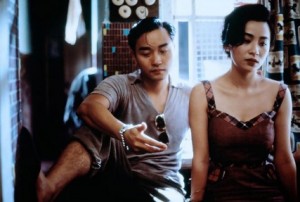 Days of Being Wild (1990), directed by Wong Kar-Wai, takes place in Hong Kong in 1960. A young man named Yuddy (Leslie Cheung) tells Li-zhen (Maggie Cheung), a young woman working at a stadium concession stand, that she will see him in her dreams. She does, and they hook up, but Li-zhen gradually discovers that Yuddy is emotionally unreachable. His relationship with the aging and wealthy prostitute (Rebecca Pan) who supports him is mysterious. When Yuddy pushes Li-zhen away, she makes a connection with a gentle cop (Andy Lau), who is unfortunately about to become a sailor and leave for a while. Meanwhile Yuddy seduces a more assertive women (Carina Lau), but she can’t reach him either.

This was Wong’s second feature, and in it he found his voice. It’s a film about the peculiar situation of being young, when the future extends too far for one to be sure of the present, and there’s not enough self-knowledge to allow any certainty of desire. Accordingly, Wong doesn’t spend very much time on action—whatever events occur in the film are secondary to an in-between feeling of waiting for something, an elusive longing in which time seems to be suspended. Cheung’s character is seeking something unknown, something that prevents him from being present now—and when he discovers that his true mother is alive in the Philippines, his journey to find her, rather than providing closure, leads further away from resolution.

Hong Kong seems an underpopulated place in this film, perhaps a symptom of Wong’s low budget. But Christopher Doyle’s delicious photography, and Wong’s inventiveness with flashbacks and flash forwards, gives the story a seductive air of romance and emotional desolation. His later films achieved more vivid effects and are generally better thought out, but there’s something to be said for the fresh energy of Days of Being Wild. This is one sad, beautiful movie, and multiple viewings are rewarding. The one real head-scratcher is the final scene: suddenly there’s a character we’ve never seen before, played by Tony Leung, getting ready to go out. And that’s it. Maybe the multiple characters and shifting point of view led to this open-ended finale. We go on to other stories.