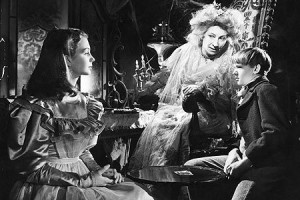 To attempt adapting Dickens for the screen is to always fall short in some way, but David Lean's version of Great Expectations has the distinction of being arguably the most successful realization of a Dickens novel on film. It conveys the moody, gothic air of this late work, especially with the early scenes in the fog and later at Miss Havisham's old mansion, beautifully captured in Guy Green's black and white photography. The casting seems well nigh perfect, with characters like Jaggers (Francis L. Sullivan) and Joe (Bernard Miles) realized just as you would imagine them. The early scenes with Pip as a boy are haunting and evocative—Anthony Wager is the young hero ashamed of his poverty, and the 16-year-old Jean Simmons is the personification of young Estella, proud and deluded. They grow up to become John Mills and Valerie Hobson: something is lost in the latter case, although not enough to spoil the picture.

The act of compression inevitably short-changes some characters and plot-lines. Wemmick and his father ("the Aged Parent") are barely present, and Biddy's role as the voice of Pip's conscience has been cut, but Lean rightly focuses on the gloomy drama of Miss Havisham (an astonishing turn by Martita Hunt), and we are also treated to Alec Guinness, wonderful in his film debut as Herbert Pocket. The inward struggle of Dickens' young hero is realized in visual terms by Lean's ingenious contrasts between the dark beauty of the Kentish moors and the artificiality of city life.

The director sought to improve on the book by ending the film with an emphatic flourish that resolves Estella's problems. I think this is a mistake. Dickens' low-key ending is more convincing, although even he spruced his original finale up on the suggestion of his publisher. But this is a mere quibble--it's hard to imagine a more triumphant melding of film and classic novel than what was achieved here. In Great Expectations, and to a somewhat lesser extent in the following year's Oliver Twist, David Lean demonstrated how to adapt a masterpiece--with a combination of deep respect and brilliant reimagining.