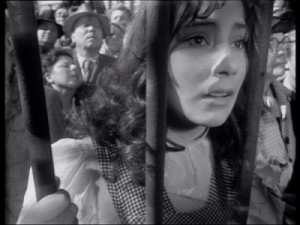 The Cranes Are Flying (1957), directed by Mikhail Kalatazov, was a major hit in Russia, and won the Palme D'Or at Cannes, but I wonder how many in the West have even heard of it. It tells the story of Veronica (Tatiana Samoilova), who must part with her lover Boris (Alexei Batalov) when he joins the army to fight the Germans when they invade in 1941. In his absence she suffers terrible losses, including a cruel seduction by Boris's cousin, a draft dodger. As she evolves from a passionate girl to a woman scarred by tragedy, she clings to the hope of reuniting with her lover.

Kalatozov was one of the innovators in the great period of Soviet silent film in the 20s - a disciple of Vertov. This is evident from the modernist style of The Cranes Are Flying. The picture uses an exciting technique - brilliant camera placement and movement, crane shots, hand-held shots, superimposition, dynamic use of sound and music – a style that weds formal beauty with deep emotion. In one unforgettable sequence, a soldier who has just been shot sees, not his whole life passing before his eyes, but everything that could have happened, should have happened, in his future – a sequence executed with perfect unity of music and montage, and to devastating, poignant effect.

This film revels in the most profound joys and sorrows of the heart, the hardest lessons of life, the deepest nostalgia for what is lost, and the greatest bonds of feeling between people. Its power is aided immeasurably by the performance of the beautiful Samoilova (Stanislavsky's great-niece), who is hypnotizing in a way that I can only compare to the classic star performances of old Hollywood. It is not perfect – what movie is? Sometimes the style is too much, almost overwhelming the plot. Sometimes the story makes its point too patly. But it's a work of rare intensity and compassion. When it was released in the Soviet Union, it caused an outpouring of emotion – audiences wept uncontrollably. The grief over the incalculable losses of the war – millions dead, millions more lives shattered forever – had up until then been smothered in the Russian cinema by the Stalinist "aesthetics" of patriotic glory. Now, finally, the flood was loosed. It was also the first time that realities such as draft dodging, war profiteering and the black market had been acknowledged in a Soviet film.

I first stumbled upon The Cranes Are Flying in a video store, years ago. I had never heard of it. It is now among my top ten favorite films of all time.