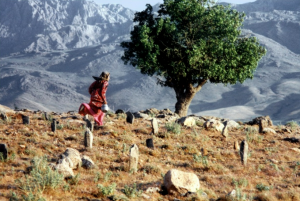 In the 1999 Iranian film The Wind Will Carry Us, a man and his two assistants visit a remote Kurdish village for a mysterious, unspecified purpose. The man (Behzad Dourani, the only professional actor in the film) is known cryptically as "The Engineer." He latches onto a village boy who becomes his guide through this new environment. It becomes evident, gradually, that he has a particular interest in a sick old woman, the boy's grandmother. It would appear that he and his assistants have come all the way from Tehran to document a certain religious ceremony performed in this village when someone dies. Instead of dying, however, the old woman starts to get better, and that frustrates the Engineer, who is forced to stay there longer than he intended, waiting for this woman to die.

The wind will carry us

The director, Abbas Kiarostami, has said that the cinema needs to free itself from the idea of the story. Like any daring statement, this can easily be taken the wrong way. In his case it reflects a stance towards life rather than a definition of technique. The events of The Wind Will Carry Us, as hinted at above, constitute a story of sorts, but they serve more as a thematic puzzle in which the viewer is drawn deeper into different ways of seeing, different perspectives on life. The Engineer carries the ways of the city with him, and the ways of the intelligentsia. He is also a friendly, decent man whose mild and quizzical gaze provides the movie's sole point of view. The contrast between this man's nervous intent and the affable stasis of village life is not biting or satiric. It is gently humorous, humble in the most spiritual sense, above all - human.

In one of many parallels to the Engineer's own journey of discovery, the film's story becomes an amusing pretext for portraying various village characters and customs. An ever-present, if less obvious, element of the film's style is its evocation of the unseen. The Engineer speaks to his assistants, but we never see them clearly. They are always offscreen. The same goes for the old woman. A remarkable running joke has the Engineer's cell phone going off, at which he then jumps into his car and drives all the way to the top of the hill where he can get good reception. On one occasion while he is up there, he meets a man who is digging a trench. This man is also offscreen. We never see him. At one point he tosses our hero a bone.

The title The Wind Will Carry Us comes from a poem by the feminist writer Forough Farrokhzad. The Engineer, who likes to recite poetry from time to time, has visited the house of a neighbor in order to buy milk. A shy girl milks a cow in a dark cellar while the man from the city recites a poem. A scene that seems strange in the telling has all the naturalness, consequence, and beauty of a special moment in life when seen in the film. The lines of the poem touch on the mystery of life and death, nature, acceptance, loss, and an ultimate serenity – all of which the Engineer celebrates with words but does not yet know in his heart.

The Wind Will Carry Us is a brilliantly nuanced, funny, wise, masterwork of film.