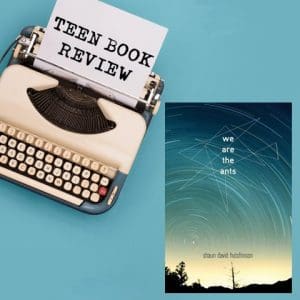 We Are the Ants by Shaun David Hutchinson is about a high school boy named Henry Denton. Henry is given the ultimatum of saving the world after continuously being abducted by aliens. Due to his recent boyfriend’s death, Henry has a hard time with this choice. Even more so, Henry is bullied at school and finds it hard to believe the world is worth saving. His relationship with his mother and his brother’s teen pregnancy makes this choice all the more hard.

We Are the Ants is a young adult book with elements of science fiction. In all the situations Henry finds himself in, he thinks critically and logically, often comparing them to scientific phenomena. Henry’s narration is sarcastic, negative, and realistic. With all that is occurring to Henry, you get a deep understanding of his view of humanity and its worthiness.

The character relationships are truly significant in Henry’s story. His relationship with his mother is strained, his brother is his bully. Diego is someone he meets at school, who hangs around him regardless of everything. Audrey is an old friend he lost contact with after his boyfriend passed away. Diego and Audrey stick with him throughout the book, but now without trying to convince him life is worth saving. The relationship with his mother and brother slowly starts to bloom.

This book deals with heavy topics like suicide, sexual assault, drug use, grief, mental illnesses, bullying, and violence. These topics should be heavily considered when thinking about reading this book. It can be heavy at times and through the first half of the book, it is difficult to find positivity. However, the ending is truly inspiring in the knowledge about human existence and seeing Henry’s perspective change.

I truly enjoyed seeing the progression of Henry’s thoughts on grief, love, and life in general progress over the course of the book. The way his relationships changed and new one's form was such a relief to read about. His perspective coupled with his interest in science made his narration really enjoyable to read. I would highly recommend this book to those who are interested in young adult and science fiction!

We Are the Ants

We Are the Ants