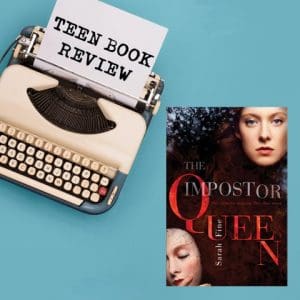 In the copper-rich land of the Kupari people, Elli is designated to be the successor of the current queen or Valtia, next in the line to wield the equal power of fire and ice. From the time she was discovered with the telltale marks of a Saadella, or next-in-line for the crown, at the age of four, she was taken to the Temple to be taught and nurtured by the Elders and priests to be prepared to become a vessel for the ancient Kupari magic, which was to be passed down once her Valtia passed away. Unfortunately, the Valtia's weakened body succumbs to the imbalance of the magic inside her after an attack from the Soturi Empire, forcing Elli to take her place.

When her people needed her services and protection the most, the magic fails to enter Elli. Even under the pressure of torture that is supposed to awaken her abilities, she remains unable to summon the magic. Her faithful handmaiden, Mim, warns her of the Elder's plot to kill her and helps her escape the Temple. Mim is caught, and Elli wanders the streets of the city until she is banished to the outlands for theft. She is found near death by a powerful ice wielder named Oskar, who brings her back to an untouched copper mine with many other banished people. Here, she grows new friendships (and a little romance) and learns many dark secrets that the Elders have stowed away for centuries.

The first fifty or so pages may be confusing to some because of the unique and generally unexplained vocabulary that the Kupari use, but the story is built on unique and engaging premises that will keep you reading to the end once you push through. Sarah Fine also paints a colorful, rich, and sometimes somewhat cultic culture in Kupari and mixes in magic in an extraordinary way that adds to the allure of the novel.

I believe the main character, Elli, could've been done better though. She gave me an impression of not having a distinct personality compared to more intriguing characters like Sig and Raimo, and I personally didn't care about her as much as I should've. And the whipping scenes may be hard to stomach for younger audiences. But overall, Fine has brought a delightful and entertaining story to the table. I will definitely be picking up the sequel.