The Book Riot Read Harder Challenge, opens a new window has tried every year to push readers out of their comfort zones, into reading they might never have tried without prompting. With this task, many readers might find themselves incredibly uncomfortable, but we’re here to help! The library may not be able to keep fanfiction on our shelves, but we are definitely willing to guide you on your fanfiction journey!

Some of you may not be interested in delving into the deep world of fanfic, and you might want to pick up a published retelling or meta-novel. Keep scrolling; I’ll cover that, too.

The first thing to know about fanfiction is that it is not inferior to any other fiction. These are works that are freely available to the public, yes, but the writers here are just like writers everywhere: they cover a broad range of technical ability, interests, and writing style. They have beta readers and editors and their own processes for writing—some publish chapters as they write them, while others write the whole thing and then publish on a schedule. Some have mastered the “one shot” while others will write a single- or multi-volume saga of over a million words. These are people who love their craft and love the people they’re writing about.

The next thing? There is fanfiction for everything. If you’ve come into this task thinking “Oh dear, I’m going to have to read some 13-year-old girl’s swoons about BTS”—well, yes, that’s a thing. And it could be FANTASTIC so if you want, go ahead and look for one. But if you can think of a popular book, a television show, a movie, a classic novel, an epic poem, you can probably find a fandom for it. The size of the fandom will vary, and you might only find one or two stories, but they’re out there.

Finally, while a vast majority of fanfic involves “ships”—the author writing about a relationship that may or may not be canon—there are many that do not involve romantic relationships at all. Maybe a side character is commenting on the happenings of a story. Or maybe we get the backstory of someone who was maligned or flat in the source material. Maybe we get an entire novel from someone else’s point of view. You never know what you’re going to find if you start searching or clicking tags.

So now, you might be thinking: but where do I FIND them?

Here are a few places to start.

Archive Of Our Own

The biggest, easiest database of fandoms of all types is Archive Of Our Own (lovingly called AO3). It’s maintained by the Organization for Transformative Works, which also does work to preserve the history of fandom. Once you’re on the home site, you can use the search bar to search for...well anything. It could be a title, or a character, or a quote you might have heard once. If you’re not sure what you’re looking for, you can use the tags on the homepage or the Fandoms dropdown to start your browsing. 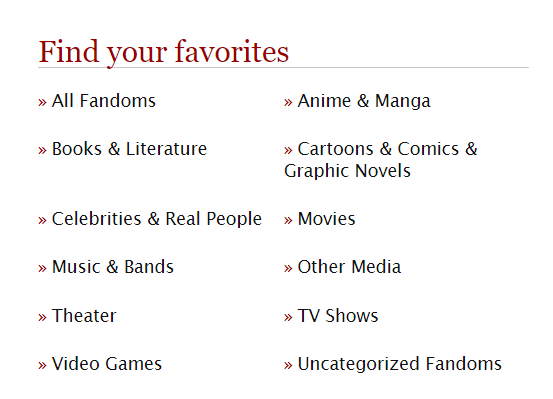 As you can see from this screenshot, there are plenty fandoms to wander into. Maybe you're not into the big superhero franchises or CW shows, but there's plenty of Phantom of the Opera fanfiction (for the book, the play, and the movies). There's probably already some for that new Cyberpunk game. And whatever show from the '90s that has experienced a revival since appearing on Netflix? There's probably a decade's worth of fic for that. Be open to anything.

(Bonus tip for AO3: if you do find one of those epic, million-word sagas I mentioned before or you just don't like scrolling on a computer or device, you can download the MOBI file of any fic on AO3 and email it to your Kindle, opens a new window! You can also download an EPUB or a PDF if you don't have MOBI-compatible ereader.)

While AO3 is probably the best one-stop-shop for fanfiction, maybe you’d rather ease your way in by going to a site that is specific to a particular work. There aren’t as many of these as there were back in the Oughts, but some are still hanging about.

(PS: if you want to do a real deep dive into the history of fansites and archives, this is a great article from fanlore. And you can also lose yourself in this list of websites for various fandoms.)

You can also try your hand at other enormous archive databases like Wattpad, opens a new window and Fanfiction.net, opens a new window, and goodness knows there’s plenty on Tumblr. But those are better for people who know exactly what they’re looking for, on a user experience level.

There's so much fanfiction on the internet, it's hard to narrow down—but every reader a fandom, and every fandom a reader, right?

Pastiche and Pulled To Publish (P2P)

Now that you’ve gotten a brief rundown of finding fanfiction online, I know some of you have been waiting for a few pastiche recommendations. So here are a few you can check out (some of which even started out as online serial fanfiction):

An Assembly Such as This (Pride and Prejudice)

Ayesha at Last (Pride and Prejudice)

As Old as Time (Beauty and the Beast)

And finally, here is the Book Riot list of recommended fanfiction for the Read Harder Challenge. There are some great recommendations there for a broad range of interests, but now you can search on your own as well.