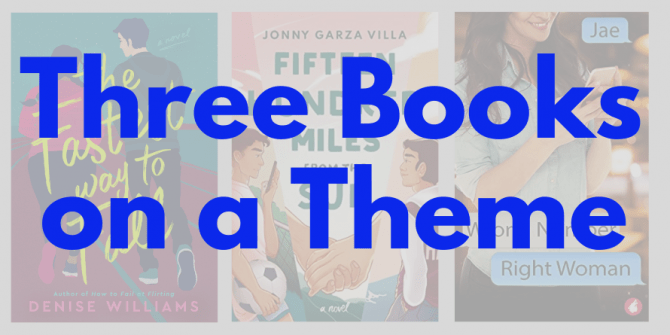 Everyone loves a good meet cute, amirite? They are one of the best parts of any love story, whether it’s on screen or on the page. But what if said meet cute doesn’t involve the pair actually meeting, though? What if they come across each other via… writing?!? Here are a few great books I’ve read recently that involve the main couple meeting via text, email, or even Twitter DMs.

The Fastest Way to Fall

Britta, a longtime editorial assistant, pitches a story that might get her a coveted permanent writing position at the lifestyle magazine where she works. She’ll use a new fitness app that posits itself as super body positive and write about the experience. Wes, one of the company’s CEOs, decides to take a client for the first time in a while, and the pair become easy friends over the app. Emails about food and exercise practices become flirty banter; emails become instant messages, messages become texts. But what do you do when that friendship could lead to either something great, or catastrophic results for your career?

As someone who has had interesting relationships with her body and exercise and food, I went into this book well aware of the fact that it might affect me the wrong way, and Denise prepares you as a reader with such care before we even start, I knew I would be able to read it. And then I fell head over heels in love with Britta. She is a magnificent, funny, lovable fat Black woman, and even when I wanted to give her a stern talking to she had my whole heart. (And I guess Wes is cool too lol.) Their journeys are joyous and heartbreaking and whole, and I love them to pieces.

Representation (Rep): Britta is a fat Black cishet woman in her late twenties; Wes is a standard sized white cishet man in his late twenties; side characters of other races but mostly cishet presenting

Fifteen Hundred Miles From the Sun

Julián lives a relatively good life. He’s got good friends, isn’t terrible at school, and loves to play on his soccer team. But he’s not out, and he doesn’t particularly know what to do about that before leaving Corpus Christi for college. Overly drunk at a party, Jules comes out on Twitter. A mutual who he’s been friendly with on his secret gay twitter account shoots his shot, and they start a long distance relationship of DMs, facetime, and phone calls. Meanwhile, at home, his coming out leads to consequences, but Jules keeps moving.

The moment I actually picked it up, after a few days of hesitating thanks to the author’s careful author’s note, I was all the way in. Julián is my precious child and I will love and keep him forever, and I LOVE the friend group Villa has surrounded him with. It’s not an easy sunshine read, but it’s worth it if you can.

Quiet, relatively shy Denny gets a text from a wrong number one night. The sender, who she nicknames Sneaker Girl, thinks she’s asking a friend for their opinion about her date outfit. Denny replies, making sure the woman knows she’s not her friend, but the pair find themselves thinking about each other, texting every once in a while. They begin to fall into a pattern, and a wrong number turns into something that could be great, if they give it a chance. It doesn’t help that Denny is certain Eliza is straight.

I was delighted by this long, quiet dive into the development of a relationship. A lot of romances have to have something happening outside of the two people’s worlds to move the plot forward, but this was all about the evolution of their relationship from strangers to friends to lovers. Each has their own lives and things they have to overcome, but when it comes down to it, the only thing this story is about is them and their love story.

Looking for more love stories, no matter what the meet cute looks like? Check out our romance genre page!

*Going with the current conversation on content and trigger warnings, I’ve started to use the term Content Notes covering both features that could be triggering and content that people might be looking for, including tropes and themes.