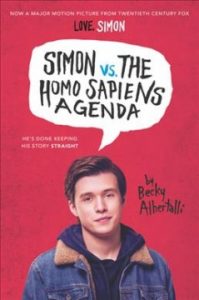 ecky Albertalli may not be a household name...yet.  But her debut novel, Simon vs. The Homo Sapiens Agenda, is now the hit film Love, Simon, which has grossed over $65 million in the four months since its release in March of 2018.

The story (that Albertalli said she thinks of as a rom-com) centers on Simon Spier and his group of friends.  Simon is gay, but doesn't know how to tell his friends and family.  He has also started up an online friendship with an anonymous person named "Blue." How will he tell everyone the truth and will he ever meet Blue?  But more importantly, Albertalli asks, "'Why is straight the default?'" and declares “'White shouldn’t be the default any more than straight should be the default. There shouldn’t even be a default.'”

Albertalli's storytelling has connected with readers of all different backgrounds because of her spot-on characterizations and her inclusivity.  Reading through reviews of all of Albertalli's books, a comment I've seen over and over is "I wish there had been a book like this when I was a teen!".  Check out the ebook or DVD, linked below!

Simon Vs. the Homo Sapiens Agenda

If you've already read Simon, you may want to check out Albertalli's other books set in the same universe.

In The Upside of Unrequited, we meet Molly (cousin to Abby from Simon), who has had 26 crushes, but never had the nerve to tell a single one.  Now Molly's twin sister is in a relationship and Molly feels left behind and more unsure of herself than ever.  A story about the power of family, with some romance on the side.

The Upside of Unrequited

I will admit that I haven't read Leah on the Offbeat yet, and I worried that revisiting Simon and his friends, and exploring another non-heterosexual relationship might feel repetitive (talk about privilege, huh?), but readers are loving it and it's on my TBR for sure!

Leah on the Offbeat

If you can't get enough of that Simon vibe, check out the two lists below with loads of recommendations for coming-of-age and coming-out stories.

Simon Vs. the Homo Sapiens Agenda

Young folks finding themselves and love in high school (or sometimes college...or that place in between) is a thing of beauty.

If you liked Love, Simon

Did you know it was based on a book? Surprisingly, it doesn't have too many holds right now! Find that, and more coming out and coming of age stories, in this list of books and movies at PCPL!