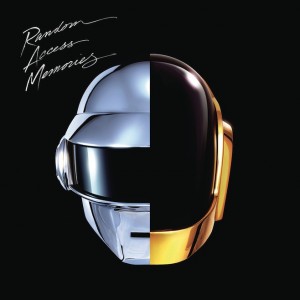 Daft Punk is one of those musical groups that just about everyone loves. And for good reason: who can resist two dance-crazed robots who fill our lives with glorious electro-disco-synthpop? As the two members of Daft Punk (French producers Guy-Manuel de Homem-Christo and Thomas Bangalter) tell it, "We did not choose to become robots. There was an accident in our studio...when we regained consciousness, we discovered that we had become robots." And luckily for us, these robots did not want to enslave the human race in a cycle of pain and misery (here's looking at you, Skynet, opens a new window)...instead, they only want us to dance. With a dash of disco, a scattering of funk, a pinch of groove, and a whole lot of electro love, Daft Punk have created, over the past couple of decades, dance hits for the world to enjoy.

After a lengthy break (aside from the robots' excellent soundtrack to Disney's TRON Legacy -- PCPL also has the Tron film), Daft Punk came back with their most successful single and album ever in 2013.

Titled "Get Lucky," the single features vocals from N.E.R.D.'s Pharrell Williams and guitars from R&B legend Nile Rodgers. James needs only one word to describe it: fun. The guitar riffs and drum beats are snappy, and the lyrics an invitation to dance:

Carl had an attack of snobbery when this song was first released back in '13, and even though he's a big fan of Chic, at the time Carl just couldn't "Get Lucky." [Carl also thinks the lyrics are an invitation to do more than merely dance.] However, listening to the long version over the past few days while re-working James's original blog, Carl's finally been smitten by the Daft Punk bug: I think the long version really allows one to appreciate how entertainingly Nile Rodgers's guitar bubbles along on top of a classic-sounding disco groove, with big electric piano chords chiming along, sounding just like an old Chic tune!

A click on any of the above text underlined in blue will take you to a download link on Freegal.  And, Daft Punk's masterful debut album (Discovery) can be found at your local library (click on the picture below to reserve a copy).