One of the most striking similarities shared by the three musicians I discuss here is a simple, well-cultivated beard. Indeed, for some music fans, that may be reason enough to attend their concerts, buy their albums, and lump them into a single blog post. Arguably, it may very well be that patch of chin hair that causes these artists to create such delicate, even bare, music. Some of William Fitzsimmons' lyrics can be so bleak he probably needs the extra hair to keep him warm throughout his performances. Even more, Justin Vernon wrote the majority of his first album, For Emma, Forever Ago, opens a new window, in a backwoods cabin in beard territory, Wisconsin. 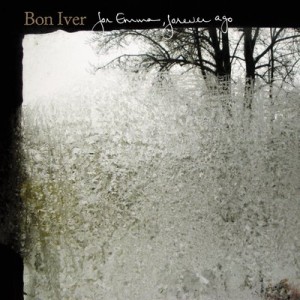 Robust facial hair growth aside, Iron & Wine's Sam Beam, Bon Iver's Justin Vernon, and William Fitzsimmons share a musical style brimming with a poetic depth and instrumental subtlety that leave listeners feeling supremely relaxed or ready to bust out some flamenco (to make sense of that last comment, watch Iron & Wine's music video for the song "Boy With A Coin"). These gentlemen are perfect whether you are seeking mellowness after a hectic day, watching the rain from your window (as rare as that may be), or slowly emerging from bed on a Sunday morning.

Iron & Wine is the most prolific of my bearded brigade, as he has produced four studio albums, a recent compilation, and several EPs (including one with Tucson's own Calexico). His most recent studio album, Kiss Each Other Clean, opens a new window, marks a departure from his early work as it incorporates a novel--though not entirely unwelcome--dose of brass. This album is quicker and heartier, though what originally attracted me to Iron & Wine was his remarkable ability to tease out great aural complexity with very few instruments and lulling vocals. It is precisely this slow build, in tandem with his abstract lyrics that causes this music to grow in loveliness over time.

Next up is Bon Iver (rough French for "good winter"), a delightful companion to the music of Iron & Wine, although you should expect a tad more falsetto. Okay, expect a great deal of falsetto--but don't let that scare you away. Though it may take a little more getting used to than Sam Beam's vocals, give Justin Vernon a chance; the Grammys certainly have. His latest album, Bon Iver, opens a new window, holds a musical quietness that washes over listeners, flowing easily from one song to the next...until you reach his last song, "Beth/Rest", which breaks the cohesion with a smart, unexpected dash of eighties synth. Holocene is a personal favorite of mine, but "Beth/Rest"--both the album version and NPR's World Cafe solo piano version--is absolutely gorgeous. He has collaborative albums in the works with The Flaming Lips and Alicia Keys, and you can also here his signature vocals on Kanye West's album, My Beautiful Dark Twisted Fantasy, among other places. If you are smitten with Mr. Vernon, don't forget his older albums, Blood Bank, opens a new window and For Emma, Forever Ago, opens a new window.

The least well-known of the three, William Fitzsimmons gets the award for bushiest beard. His lyrics tend to center around his personal emotional trials, including his parents' divorce, which can get a little heavy at times. Still, his quiet delivery and occasional use of electronica tend to keep listeners from feeling too down. Some of his covers (e.g. Katy Perry's "I Kissed a Girl") are even fairly lighthearted! Check Freegal for some free and legal downloads of music by Billy Fitz, opens a new window!

So now you know, beards are scientifically linked to the production of delicate sounds. Well, maybe not scientifically. Now I can't get ZZ Top's gnarly beard out of my head...