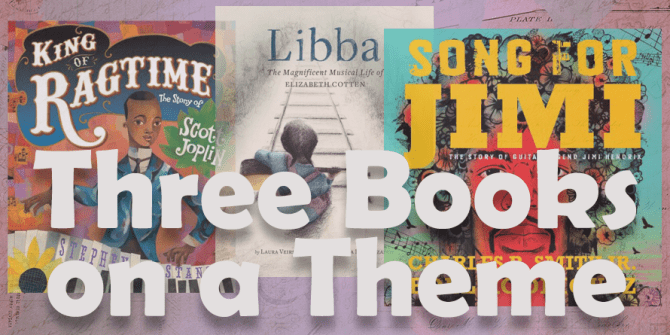 Music is everywhere for those who listen for it. It is ever-present and all around – from the wind in the trees and chattering of birds to a squeal of tires or banging construction sounds. Often, those who hear music everywhere find joy in sharing music with others. Here are three biographical picture books – for readers of all ages and illustrated in different styles - about African American musicians from different time periods and how they developed their own musical styles.

Scott Joplin (1868-1917) was born into a family that loved music. They played together regularly and Scott played the cornet in the family band. When Scott was young, his mother cleaned for a wealthy family that owned a piano. Scott created new songs for each household chore and his mother knew he had a special talent for the piano. With brilliant illustrations in two page spreads, the book covers Scott’s journey to creating a new type of music – Ragtime.

If you have ever watched the film The Sting, you have heard ragtime music. The theme song, “The Entertainer” is a ragtime song written by Scott Joplin.

Elizabeth Cotton (1893-1987) was a left handed folk musician who taught herself to play guitar using her brother’s instrument. As he was right handed, she learned how to play the guitar upside down. Her most famous song is “Freight Train” which she wrote when she was just eleven years old! Libba had a huge break from music as an adult and didn’t play for over forty years. She rediscovered her love of music later in her life as a housekeeper for a very famous musical family. Read the book to learn more about her story. You can watch Libba playing “Freight Train” (while holding the guitar upside down) in her later years here.

Jimi Hendrix (1942-1970) had many challenges in his young life. His parents screamed at one another instead of singing and his mother left the family when he was young. His imagination and love of music are what kept him going, even as the adults in his life tried to discourage him from following his dream. A Song for Jimi is written in rhythmic and rhyming verses covering different time periods of Jimi’s life and the illustrations are an explosion of colors to match his music.

For more picture books about African American musicians, check out this list:

Can you Hear the Music?