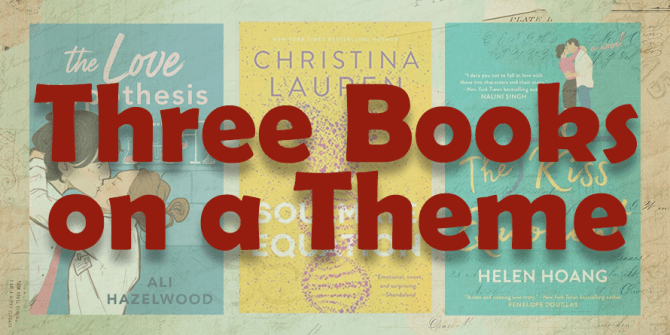 There are themes, tropes, and settings that come and go in romance, but some of them stick around for a while. One thing I’ve really enjoyed over the past few years (and probably more, but it’s really stuck out recently) is the number of protagonists working in STEM. A Princess in Theory was the first time I remember reading about a Black woman working in science in a romance novel, but it wasn’t the last! And the three books I’ve pulled together here not only feature people working in STEM (sometimes both protagonists, even if they don’t work together), they have particularly STEMmy titles, too! (And yes, these are all "The [romance word] [STEM word]" titles!)

The Kiss Quotient by Helen Hoang

Okay, I think I talked about a Helen Hoang book last time around, too, but this was her first and has a special place in my heart. Stella, the main character, is autistic, and has a particular method for figuring out how to be better at romantic entanglements. Part of that is to be better at sex…so she hires an escort to give her sex lessons. Because why not? Michael is patient and giving, and they end up more in a… practice relationship? Sure, let’s call it that. Michael becomes Stella’s practice boyfriend, who helps her figure out what she wants and doesn’t want in a relationship. And if what she wants is Michael? Well.

The Love Hypothesis by Ali Hazelwood

This is a very sciency science romance, featuring two people working in the same university department but in separate labs. He’s a professor and she’s a grad student (but not his, no worries!). Olive randomly approaches a man in a dark hallway, asks “can I kiss you”, and the rest is history. Well. Not quite. Dr. Adam Carlsen is considered the [expletive deleted] of the department, but goes along with Olive’s pretense that they’re dating, no matter how kind of ridiculous her reasoning. As they get to know each other, though, maybe pretending isn’t as hard as they thought. This is one of those (seemingly) rare single-POV romances, which is maybe why it had such a hold on my soul.

The Soulmate Equation by Christina Lauren

Jess is a statistician and a single mom. She doesn’t particularly have time or desire to date, instead focusing her energy on hating Americano, the hot guy who comes into the coffee shop where she spends a lot of her time at the same time every day. When she discovers that he’s developed an app that uses genetics to determine the likelihood of someone being your soulmate, she’s skeptical. But after submitting her own sample to the company at a particularly vulnerable moment, it turns out she might have met her match: Americano! (Whose name is actually River.) (Note, this is also a single-POV romance, and maybe I've discovered that those are my favorite?)

Over the past few years, we’ve been getting more and more romances featuring one or more people working in science, math, and the other disciplines that fall under the STEM umbrella, and we’re going to keep getting more, probably. As someone whose education was soundly based in the humanities and social sciences, I couldn’t tell you if any of the actual work is right or wrong, but I sure do enjoy reading about the possibilities!