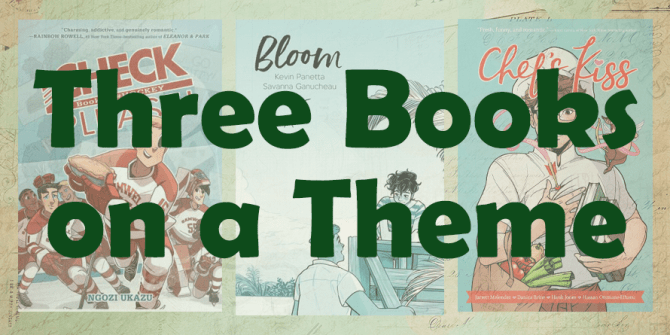 Honestly, I was about to write a Three Books on a Theme post about queer books called Chef’s Kiss, because there are oddly several, including this and another one, opens a new window that both have blue covers! Talk about confusing. But this one is a comic and the other is a romance novel, so at least there’s that distinguishing factor.

In this particular Chef’s Kiss, Ben is a recent graduate looking for a writing job, when he’s drawn to a very different kind of job opening where a very attractive sous chef works. He goes for it, since nobody else is hiring him, and finds that he really loves the work he’s doing. But what happens when his demanding parents find out he’s been lying to them? And why does the head chef at this restaurant only trust a pig?

Where Chef’s Kiss is wild with color and action, Bloom is quiet and soft, in more ways than one. Told in quiet imagery using varying shades of blue, this is yet another story of a young man trying to figure out what he wants in life and how he’s going to get out from under his family. Only this time, it’s his family’s bakery that he feels is holding him back. When the friendly and handsome Hector starts working there for the summer, Ari has a lot of questions to ask himself.

This two-volume story is a delightful coming of age love story centers around one of the most delightful characters in comics (second only to Tatsu, the most wonderful ex-Yakuza househusband, opens a new window). Eric Bittle, nickname Bitty, is a freshman hockey player who vlogs about his life and his passion: baking. He doesn’t hide the fact that he is an openly gay hockey player and his teammates are wonderful about it—including the team leader he has an enormous crush on, NHL hopeful Jack, who is pretty sure doesn’t like him for some reason. We all know how that goes, right?

These are all quick reads that brought me a lot of joy. If you’re in a reading slump or just want to break out of your I’ve read all of Heartstopper, opens a new window and have already watched the first season five times funk, one or all of these is a great place to start.