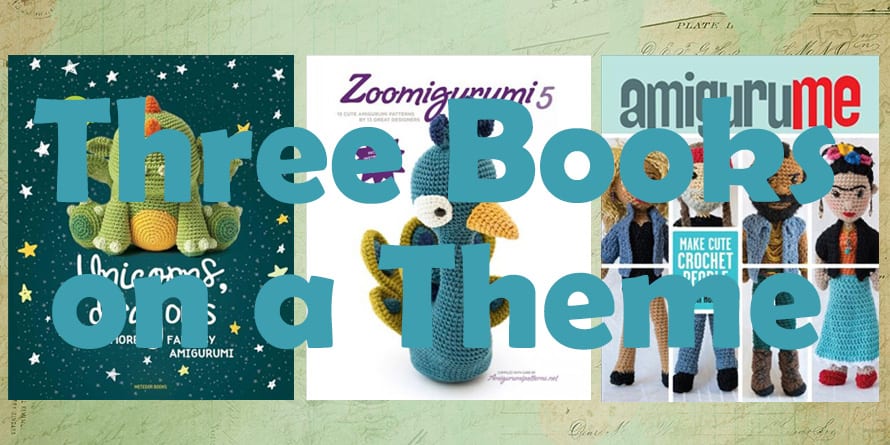 Amigurumi is the art of making small dolls out of yarn. You can knit them or crochet them, but I would say, as a complete in-expert, that most people crochet them. I base my inexpert opinion on the fact that there are way more amigurumi books, online tutorials, and websites with amigurumi info based on crocheting them rather than knitting them. There are, of course, amigurumi knitting books, websites, and tutorials. I’m just biased, because I don’t really know how to knit.

According to Wikipedia, the word amigurumi is “a compound of the Japanese words 編み ami, meaning ‘crocheted or knitted’, and 包み kurumi, literally ‘wrapping’, as in 縫い包み nuigurumi ‘(sewn) stuffed doll’.”

I was that kid growing up who had way too many stuffed animals. I still have some of the ones from my childhood, and every time in my adult life that I’ve purged some of them (Thank you, Maria Kondo), I feel a real, physical sense of loss.

I also studied Japanese in college, spent some time in Japan, and generally love anything kawaii.

So in 2009, it may come as no surprise that I decided I wanted to learn to make amigurumi, so that I could make my mom a yarn nativity set. I started going to the Library’s knitting groups, and one of my colleagues said, as I was learning to cast on, “You need to learn to crochet if you’re going to make amigurumi.” She obviously didn’t know you could knit amigurumi (see, my inexpert opinion is held by others), and I honestly didn’t know the difference between knitting and crocheting. So, after making one knitted scarf as my inaugural yarn project, I started teaching myself to crochet.

As luck would have it, I work at the Library, and I could borrow books, and even better, the Library held an entire series of classes on making your first amigurumi. I made a floppy, kind of cute, kind of ugly dog that had buttons for eyes as my first-ever new yarn friend.

Then, after only a few months of almost constant crocheting, I had become an amigurumi master! Just kidding. I was still working on the nativity scene. I did eventually finish it, and in time for Christmas! That set is still my yarn opus, but I have made probably 100 or more amigurumi since then.

What I tend to do is borrow every amigurumi book the Library has, go through the entire thing studying the patterns, and if there are more than three in the book that I want to make, I return the Library’s copy and go buy the book. Here are some of amigurumi books that I’ve borrowed and maybe bought that you can use to start your very own journey of making yarn friends.

After the nativity scene, I primarily focused on making animals. But sometimes I ventured into the people realm, and when I checked out this book, I had the revelation (it’s gasp-worthy … wait for it) that you could make legs that weren’t separate pieces sewn on, but continuously attached to the body! Gasp-worthy, right? I mean, who wouldn’t gasp at finding this out?

I have made oodles of little people using the basic patterns in this book. I’ve made my niece a doll of herself. She was about 6 at the time, so it made sense then. I made Spock multiple times for multiple people, Harry Potter, Frida Kahlo, and even Michelle Obama. I made Lin-Manuel Miranda as Hamilton. It looks like Lin-Manuel Miranda, as you can see for yourself below. This book will make you a person-crocheting ninja. It is so good, so detailed, and just all around fun! 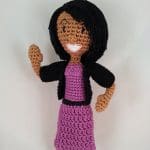 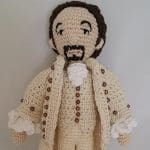 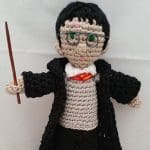 Fantasy lovers, this book is the best! I’ve made the baby peacock (adorbs, people!) and two versions of the mermaid (standard white woman as in the book and a black mermaid with dark purple hair – beautiful!). The mermaid pattern from head to torso has also become one of my go-to patterns for making people, especially when I want them to have cute round balls for their head. I used that partial pattern to make Merida from the Disney film, Brave. The HAIR! It is so awesome. Just like Merida’s. You can double the amount of hair in the pattern and make a huge, full head of curly amazingness. 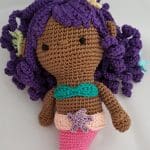 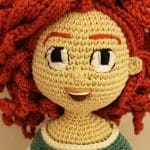 The Zoomigurumi series is a great because it compiles patterns by different designers, so you get to make different styles of animals. Out of Zoomigurumi 5, I made the peacock (I seem to have a thing for peacocks), which ended up being SO KAWAII that I had to give it to a friend for her birthday. I’ve also made the Kangaroo and Joey from Zoomigurumi 3.

I love series like Zoomigurumi, because series. And because each book has unique animals that someone in my life will love. 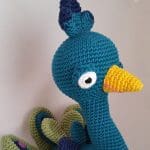 Of the 100 or so amigurumi I’ve made, there are only about 5 that I’ve kept. They go out as gifts to friends and family, who I certainly hope love them as much as I do. If not, they might Marie Kondo them in the future, and I’m sure I’ll feel the pang wherever I am in the universe.