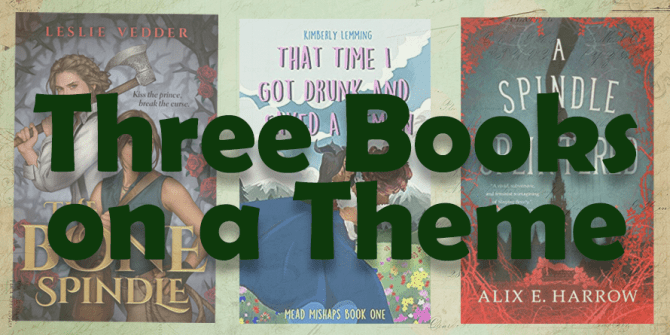 One might say that the best adventure stories feature a reluctant hero—the person who definitely has no desire to Be A Hero—but in order to Do The Right Thing (or sometimes just because they end up in the wrong place at the wrong time) they are now one of those people who go on Quests. Some sigh heavily, pack their satchel and go, while others huff and moan, whining all the way there (and back again).

These three books have a few things in common that made them immensely enjoyable. For one, the reluctant questers are all women. They all have their own interests or goals, and none of them include saving civilization from some big bad, or rescuing a royal in danger, or some combination of the two.

If you’re looking for some fun fantasy to actually enjoy while you’re reading, that skips along at a pretty good pace, check out these three books.

That Time I Got Drunk and Saved A Demon

Cinnamon’s family owns a spice farm, and her best friend is a cheesemonger’s daughter named Brie. I know, right? Anyway, Cin gets drunk with her BFF one evening, and as she’s thrashing through the woods making her way home, trips over a very tall person. That person ends up becoming some kind of hungry creature, but is deterred when she throws cinnamon in his face. When that same being comes to her home the next morning asking that she help him to save multiple races from the evil witch who has been presenting herself to the good people of the nation as a goddess, she eventually agrees. And off the two go, on a journey to stop the witch. And maybe they are also attracted to each other.

When I saw the blurb that called this Indiana Jones meets Sleeping Beauty, I knew I had to read it right away. A century ago, Prince Briar Rose was cursed and then saved by various witches in a land of magic, and has been sleeping in some hidden place in a kingdom buried by forest. Fi and Shane are on a relatively low-stakes adventure in search of a run-of-the-mill treasure, when Fi, our Indiana Jones type character complete with hat, jacket, and whip, pricks her finger on the same bone spindle that left Briar Rose sleeping for a hundred years. Now, she’s bound to him and destined to find the sleeping prince, when she would rather just be living her quiet nomad life, searching for the resolution for her own curse.

Okay, so this is another Sleeping Beauty story. I love Sleeping Beauty, okay? It has its problems with consent and patriarchy but we can’t control what latches on in our most formative years. I mean, come on: Tchaikovsky, a cool villain who’s bad just to be bad and turns into a dragon? A prince with a name who actually does something? Give me more of that, but make it fun!

Zinnia is a modern-day twenty year old with a rare disease. Though many have tried to cure it, those who have it rarely make it past twenty-one. Because of this, she’s always been obsessed with Sleeping Beauty, hoping she herself can be saved from a fatal curse with an endless sleep. When her BFF Charm throws her the birthday party to end all birthdays, literally, Zinnia finds herself falling through space, and into the world of Sleeping Beauty herself. But it turns out there might be more than one, and she and Primrose are on a quest to save themselves from the fate they’ve come to accept for themselves.

I don’t read a whole lot of fantasy, but these are the kind of stories I can get behind. I can’t wait to read more by these authors!