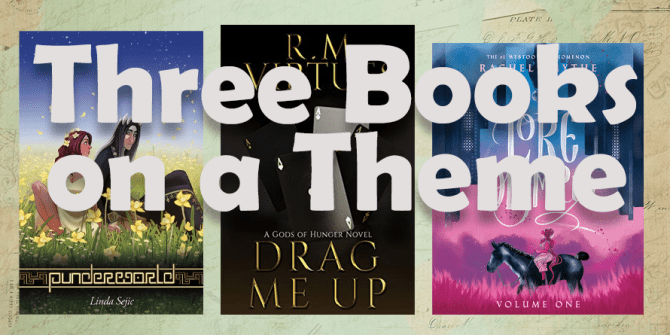 Greek mythology has always had a place in our modern canon. Classical education often included examination of Greek and Roman history and myths, and that has bled through into our own study of world literature. I’ve been reading translated versions of the actual stories since I could read compound sentences, and people have been twisting and retelling those stories much longer.

One of the myths that’s seen a bit of a bump recently is the story of Hades and Persephone. The people who have been exploring the pair have taken a different lens than many of us were taught—mostly that Hades isn’t an all-bad kidnapper holding the spring goddess hostage for half the year. Instead, they’ve explored the potential personalities of such a pair, and dropped us into different versions of the story. I still haven't read Katee Robert's Neon Gods, opens a new window, which is the beginning of a whole series called Dark Olympus, but these are all standout examples of how to play with the idea.

Originating as a webcomic (and continuing to be so), this graphic novel series tells us about an Olympus in neon colors. Persephone’s world is very pink, while Hades’ is blue. When Aphrodite is insulted by Hades’ glorifying (well, for him) over Persephone’s beauty, she has her son do something bad. And when Hades finds an unconscious Persephone in the back of his car (yes, there are cars and phones in this version of the story), he keeps her safe through the night. Since this is only the beginning of their story, volume 1 only hints at the lasting relationship the two could potentially have.

Similarly originating as a webcomic, Punderworld takes a more classic and classical look at the pair. Told heavily from Persephone’s point of view, we follow her through a bit of coming of age, and having a crush on the tall and broody fellow who’s come to visit her mother for ambrosia. We get a lot more of her relationship with her mother, and the limitations of living as a minor goddess. And this one is also ongoing, so you won’t get a full story here, either.

Can I say “and now for something completely different” without the threat of legal action? Because while this is another look into the story of Hades and Persephone, this is not the familiar magical world of the Olympian gods. This is a brand new world created by RM Virtues that involves a different kind of underworld, and a woman who is a goddess on aerial silks but has no particular magical powers to speak of. These two have immediate chemistry when they meet, but have a lot to get through before they can have a lasting, complete relationship. This one is a romance novel, so you’ll get their complete story in this one volume.

I love a good retelling. While my earliest days of reading them were mostly Pride and Prejudice based thanks to Bridget Jones’s Diary, I will wander into any book that is giving us a new story in a new way. I’m glad Hades and Persephone are making their way into the fold.