This review was submitted by one of our talented teen virtual volunteers. Truly Devious has been reviewed by another volunteer. Read the review by Kella here. 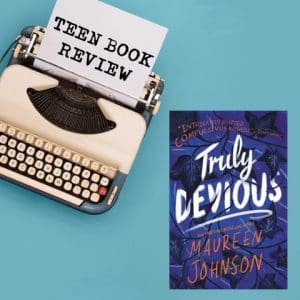 Truly Devious by Maureen Johnson follows Stevie Bell and her time at a famous academy where the kidnapping of Alice and Iris Ellingham took place as well as the murder of Dot, a student at the time of the kidnappings. Stevie herself is obsessed with solving crimes and makes it well known throughout the book. She has dedicated her life to knowing everything there is to know about the case with the full intention of solving it. While the case itself isn’t completely solved in the first book Stevie makes important observations and is on the path to solving it.

From the beginning of her time at the academy till the end of the book Stevie is shown to doubt herself a lot, which makes her a more realistic character. Constantly feeling out of place at a school for the brightest she feels the need to prove herself and solve the mystery on her own. This gives the reader the opportunity to relate to Stevie and her struggles.

The structure of the book is set up in a dual point of view alternating between Stevie and characters who were alive and involved with the kidnappings. This makes it a little confusing at first but ultimately gives you a bigger view of what’s going on since some things which are revealed in chapters from the past become relevant in the chapters set in the present. There were some suspenseful chapter endings which really left you wanting more since the character changes followed different storylines.

Truly Devious overall is a good read for people who are looking to get into the genre! The pacing is good and the book keeps the reader involved and always guessing. A 5 out of 5 star  read especially since the ending will leave the reader shocked and ready for the next book!