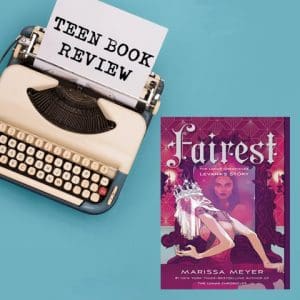 After her older sister, Channary, forced her to burn herself in a fireplace, Princess Levana Blackburn of Luna always hid her disfigurements and scars under her glamour. At fifteen, her parents and rulers of Luna were brutally murdered by a stray shell that snuck into the palace, allowing Channary to ascend onto the throne. During the funeral proceedings, Levana’s longtime crush, an older palace guard by the name of Evret Hayle, comes to pay his condolences with his wife.

But Levana finds a time to strike after Solstice Hayle passes away from complications during childbirth. Using her glamour to look like Solstice and manipulating his bioelectricity with her Lunar gift, she makes Evret marry her, and Solstice’s child Winter becomes her stepdaughter. Channary disapproves of the marriage but is distracted when she becomes pregnant and gives birth to the next heir of the royal line, Princess Selene. She later dies from regolith poisoning, and Levana becomes queen regent.

Luna flourishes under her rule, but resources were rapidly depleting given their lack of a trade alliance with Earth, the future was looking bleak, especially for Levana. Weighed down by a failed marriage and the prospect of her niece taking her place once she turned thirteen, Levana starts taking more drastic methods. She sets fire to the nursery, allegedly killing Princess Selene to secure her position. Then when news that the Empress of the Eastern Commonwealth passed away, she hires the Head Thaumaturge to assassinate Evret so she could propose a marriage alliance to the Emperor.

Fairest provides a shocking personal recount of events from the past of the main villain in the Lunar Chronicles. Reasons for why Levana's relationship with Selene/Cinder and Winter were what they were in the main series come to light. The circumstances that shaped Levana into a tyrant are also revealed, although more as fleshing out the character rather than garnering sympathy from the audience. Her crimes cannot be defended by the incident of her sister burning her decades before but the result gives an insight into what comes out of a society based around vanity, neglecting parents, and the influence of a cruel and manipulative older sibling. Would recommend the novella for older audiences.