One summer, I met a Stephen King reader.

He gave me Night Shift.

I was skeptical. It’s hard to find two authors who are more different. Where Austen is Sense and Sensibility, King is Suspense and the Supernatural. Austen is Pride and Prejudice, King is Paranoia and Psychopaths.

I’m also a thorough reader, so before I dove into the short stories collected in Night Shift, I read the preface to see what King had to say for himself.

It turns out, King and Austen have something in common. *Gasp!*

If you were to create a Venn diagram of the books and authors that inspired the work of King and Austen, there would be someone in the overlap. Her name is Ann Ward Radcliffe.

In 1794, while George Washington was president and the Louvre was first opening to the public, Radcliffe published her most famous work called The Mysteries of Udolpho. 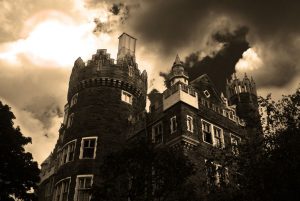 Udolpho is the name of a mysterious castle where the story’s young heroine Emily is held captive. She is haunted throughout the book by the memory of something hideous and terrifying she had seen in one of the castle’s darker corners.

In the preface to Night Shift, King references Radcliffe as he talks about the dark corner of the human mind that fixates on death and dying. To be confronted by death is to tackle the antithesis of one of humanity’s greatest desires: survival. King attributes the popularity of his stories to the strength of the emotions, especially fear, that play in the minds of people who read stories like his; stories where the characters face frightening and mysterious occurrences in which they are almost powerless.

Night Shift’s preface reads like a response to people critical of the literary merit and legitimacy of Stephen King’s books. Sure, King is popular, but is there any value in books like his? Books that are so weird and twisted? Before I read it, I couldn’t see any merit or value.

People don’t seem to question Jane Austen’s novels like they do Stephen King’s stories. Her novels have enjoyed an established place in English Literature for over one hundred years. Before that though, before English majors and classics lovers were talking her up, the same challenges of merit and legitimacy were levelled at her work.

Northanger Abbey is Austen's satirical answer to the novel critics of her time. The popularity of satirical writings doesn’t usually outlast the time they were written in. As society changes, the punch and zest fade. For example, people stop caring how cleverly you can roast specific politicians once they leave office. Yet Austen’s Northanger Abbey is a perennial favorite. Why? Because she accompanies her humorous satire with her own thoughts about the things that make people happy.

Like King’s stories that confront readers with the universal human experiences of fear and death, Austen strokes the minds of her readers with things universally acknowledged to make humans happy. In other books she wrote about love, or knowing yourself, or second chances. In the case of Northanger Abbey, she also wrote about reading and what reading means to the people who do it.

"You have been abroad then?" said Henry, a little surprised.

"Oh! No, I only mean what I have read about. It always puts me in mind of the country that Emily and her father travelled through, in The Mysteries of Udolpho. But you never read novels, I dare say?"

"Because they are not clever enough for you -- gentlemen read better books."

"The person, be it gentleman or lady, who has not pleasure in a good novel, must be intolerably stupid.”

No one wants to be intolerably stupid. Myself included.

I plan on taking Austen’s advice. Next time I want to indulge in a nose-wrinkle when I find out about someone’s guilty reading pleasure, I’m not going to ask about literary merit and what the critics say. Instead I’ll ask…

Was it good? Did you enjoy it?

One more detail from the Northanger Abbey quote …Over two hundred years ago, Austen knew what we still talk about today. Reading takes us places. Whether that place is the Castle Udolpho, or Regency England, or Salem’s Lot.

I read Night Shift. It took me places. It was good. I enjoyed it.

Have you ever tried reading something different and been surprised by something familiar? Tell us about it in the comments!

Want to find out what it was Emily saw in the dark corner of the castle? The library has a copy of The Mysteries of Udolpho you can borrow.

You can read the preface to Night Shift in the library’s ebook copy from Overdrive.

Can't get enough of Stephen King, can you? Here's a link to a catalog search for his stuff. We have tons of stuff, in tons of formats for you to enjoy.

Are you a Stephen King fan? I dare you to try some Jane Austen! You might enjoy it. I recommend Northanger Abbey and/or Pride and Prejudice.