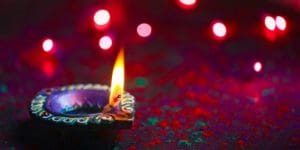 Diwali is observed today, Thursday, November 4. To help myself learn more about it, I turned to the E-Library and did some searching.

To answer this question, I turned to Britannica Library. The article on Diwali explains that Diwali is "one of the major religious festivals in Hinduism, Jainism, and Sikhism, lasting for five days from the 13th day of the dark half of the lunar month Ashvina to the second day of the light half of the lunar month Karttika." Generally Diwali is called the Festival of Lights, since diyas (small earthenware lamps filled with oil) are lit on temples and houses, and set adrift in rivers and streams. "The festival generally symbolizes the victory of light over darkness."

A bit of Diwali's history

In this article from the New India Times, which I found in Explora, I learned that Diwali is mentioned as far back as the second half of the first millennium and has its origins in "the epic texts of the Hindus - the Ramayana and the Mahabharata." This article includes photos, and explanation of regional differences, and some fun tips to have a guilt-free Diwali, since there is a lot of food involved!

Read the full article by clicking on PDF Full Text.

More like Christmas with fireworks. Prefer to listen to a short broadcast about Diwali? Talk of the Nation broadcast a short story about Diwali / Deepavali in 2012. They interviewed Vasudha Narayanan, director of the Center for the Study of Hindu Traditions at the University of Florida and took some calls from listeners. I found his is Gale in Context: Global Issues.

Want to see more? Visit the E-Library and try out any of the myriad resources we offer. You might lose a few hours there, but it will be time well spent.