What? No harissa, sambal, or gochujang? No sriracha, zhug, or deggi mirch? No hot sauce of ANY kind?! Chilis are native to two areas in the world, México/Central America (capsicum annuum) and from South America (capsicum chinense and c. frutescens, among others). They did not exist on any other continent including Asia or Africa. 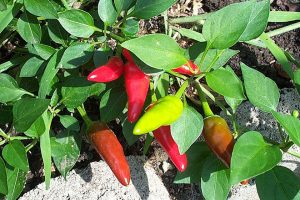 It wasn’t until the 1500s, when the Americas were initially exploited by the Europeans, that chilis were disseminated by the Portuguese and Spaniards to the rest of the world—and voilà: paprika, chili-infused kimchi, la jiao jiang, and thousands of other chili-based products and condiments were born.

As a matter of fact, this tongue-torching fruit has become so integral to Chinese and Indian cooking, that it’s nearly impossible to conceive of either of these cuisines as being “chili-less.” According to the Chinese-based newsletter, “The Produce Report,” China alone produces over 28 million tons in one year.

The word “Chile” is from the Nahuatl (Aztec) “chilli or xilli.” None of these fantastic heat bombs is a pepper. Columbus, who also misnamed the people of the Americas, gave that misnomer. Are we surprised? He bit into a chili, felt the heat of a peppercorn, and the rest is history.

The earliest cultivation is estimated at about 7500 BC, giving rise to the speculation that chilis were among the first plants to be domesticated in México and Central America. (The oldest evidence of cultivated corn was discovered in Central México more than 8,700 years ago.) Excavation in the Tehuacán valley of México has produced evidence of seeds, fruits, or pollen dated approximately 6,000 years ago, and at Huaca Prieta, Peru around 4,000 years ago. The South American varieties spanned from Bolivia to Brazil. Taken from the native Caribbean Taíno people’s word for chili—axi, aji is the name commonly used throughout the Caribbean and South America.

Chilis had been used in the Mexican state of Chihuahua from at least 1150-1300, but their use was limited further north in what is now the American Southwest. The native people there did not adopt chilis as major part of their diet until after Spain colonized the area. So we can infer that chilis are not native to New Mexico, contrary to popular belief. Sorry Hatch. 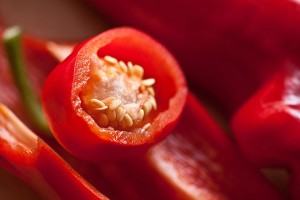 Once the Portuguese and the Spanish blew the world’s taste buds apart through the introduction of chilis, there was no limit to innovations. Chilis became an ingredient in Korean kimchi at the end of the 18th century—since salt had become progressively more expensive. Gouchujang appeared for the first time in 18th century books. Interestingly enough, chilis were first mentioned in a Korean collection of essays published in 1614.

The popular African harissa first appeared between 1535 and 1574 during the Spanish occupation of Tunisia. Prior to the arrival of chilis to Indonesia in the 16th century, cabya or the Javanese long pepper (a relative of the black pepper family) was used for heat in sambal chili pastes. Middle Eastern zhug had to wait for chilis to arrive from the Americas in order to acquire its legendary heat.

Paprika grew wild in Central Mexico millennia before it appeared in Buda (Budapest) in 1569. Spanish pimientos and pimentos were Mexican in origin. The famous romesco sauce of Catalonia is heavily dependent on two new world fruits: chilis and tomatoes.

Deggi Mirch, most currys, and mirch pakoras—among others, are all made possible through the wealth of flavors of new world chilis.

No matter what part of the world you hail from, food is much more interesting and flavorful through the magic of capsicum—the heat factor of chilis. So during this “Mes de la Cultura,” give thanks to the people who first braved the heat and cultivated one of the greatest contributions to world cuisine.