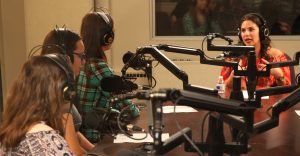 Tucson teens have interviewed  authors at the Festival of Books since 2010. This year was the second year they were able to use the studios at Arizona Public Media to record the interviews.  Making their way through the excited crowds and sunshine on the weekend of the Festival, both students and authors settled comfortably into their seats at the AZPM studios for intense, funny and inspiring conversations.

Jennifer Nielsen met with a group from Flowing Wells Junior High School, thrilling them all with her energy. She is the author of The Ascendance Trilogy, The Mark of the Thief series and many other titles. The Traitor's Game is her latest title and is the first in a new trilogy. The Traitor's Game

Sandhya Menon spoke about her book When Dimple Met Rishiopens a new window and about the unexpected  path she took to become a writer. Three students from Mountain View High School interviewed the author and this is what Katie said about the experience, "Sandhya Menon was cool, calm and collected when answering our questions. We all loved her book and found out interesting things about her. We discovered that she loves romance movies and that most of her family lives in India. It was an amazing time and I am glad I could be a part of it." When Dimple Met Rishi

Zoraida Córdova, the author of Labyrinth Lostopens a new window and other titles in the Brooklyn Brujas series was interviewed by a group from Tucson Magnet High School. This is what one of the students, Tianna, had to say about the experience, "I had a lot of fun and the interview itself was calming and felt like a good old conversation between friends, which made it all the more fun to do. I don’t think I even stuttered once!" Genna added that the author was really easy to talk to. Angel had this to say, "I was honored that I was able to have had this experience and can only hope anyone who has a passion for books, journalism, etc. can get involved that way they can share the same thrilling experience as I did."Labyrinth Lost

Victoria Aveyard, author of the successful dystopian series, Red Queenopens a new window was interviewed by students from Tanque Verde High School. In her interview,  Ms. Aveyard revealed that when she is writing a novel, she reads mainly non-fiction so as not to get distracted in her focus for the story she is creating.  Natalie, one of the teens in the group mentioned, "Victoria was warm and welcoming and answered all of our questions to the best of her ability and still kept the conversation light. She was an amazing interviewee and she wasn’t afraid to talk about more than just the happy side of the book! I have only interviewed two authors and she was in the top two for sure!"Red Queen

You can find the full interviews on Soundcloud.opens a new window