I first discovered Kate Bush through my mother when I was about seven years old. Having been a child with an extremely overactive imagination, I was immediately allured into this new world of dream pop alternative rock. Imagine if Glenda The Good Witch from The Wizard Of Oz went on to pursue new wave rock with a passion for ballet and books, then you would have Kate Bush. 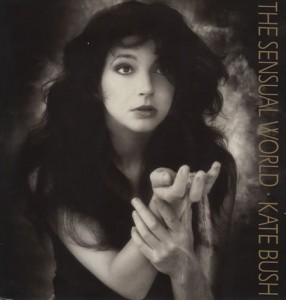 David Gilmour from Pink Floyd is known for discovering Kate in the mid 70's and helping her kick start her career. With her debut The Kick Inside, she earned her first hit with "Wuthering Heights," an homage to the Bronte novel of the same name. The lyrics are spoken through the character of Cathy's ghost, magnifying the tragic repercussions and regrets of unrequited love, [Fun Fact: Tupac Shakur was a die hard Kate Bush fan and this track was one of his favorites.] Her next album Hounds Of Love delivered two outstanding singles. "Running Up That Hill (A Deal With God)" touched on the complexities of a man and a woman in a relationship and the difficulty of trying to understand one another. "Cloudbusting" is about Austrian psychoanalyst Wilhelm Reich and the bond with his son Peter. Reich designed a machine that could presumably "create rain" but was shut down and arrested by government agents. The music video found heavy rotation on MTV, was directed by Terry Gilliam, and starred Donald Sutherland as Reich.

The Sensual World, opens a new window was her next effort and my personal favorite. Once again, the album explores unexpressed and unrequited love with the explosive track "Love And Anger." One of her louder singles emphasizing more on her rock side, featured David Gilmour on guitar. The title track, "The Sensual World," is based on James Joyce's Ulysses. A lovely blend of early 90's alternative rock with a hint of Celtic, this track exudes overwhelming passion and temptation.

The track "This Woman's Work" is closest to my heart. My mom, who first introduced me to this song over twenty years ago, is currently fighting breast cancer. The song reinforces the fact that women are magnificently strong beings capable of overcoming the darkest adversities. At this moment in my mother's battle, the lyrics are more relevant than ever.

Thank you for letting me share my thoughts on one of my favorite artists. Enjoy and share.