This letter was written by Mariah, a customer, to her Library GED instructor, Christine. We're grateful to Mariah for sharing this story. 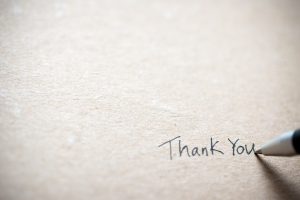 I never did well as a child in school. I had undiagnosed dyslexia, no drive, motivation, or push from my parents. I was raised to become a homemaker and mother. School and education were afterthoughts. It took me years to realize I wanted and deserved an education. It wasn’t until my junior year of high school that I realized, “Hey, learning can be fun.” By then, though, I hadn’t earned enough credits. By my senior year I realized I would not be graduating with the rest of my class. I was so discouraged and heartbroken over it that I stopped trying.

After high school my mental health really began to suffer. In January 2013 I tried to take my life. I was admitted into a psychiatric ward for five days and when I got out I was forced to go to therapy. The first time I was told I was smart, and genuinely believed it, was at therapy. My therapist encouraged me to join programs to help me join the workforce and earn my GED.

I went to my first GED class at the Library in October 2015. I was so afraid of being judged by the teacher or the librarians, but nothing of the sort happened. Everyone was so nice and welcoming. The librarian was so helpful and understanding. I passed my English test three months later, then two weeks later passed my science test.

I became too confident and stopped going to the library classes. A year later I joined a program working with the elderly. I was told by my caseworker that I needed to further my education to continue to be a part of the program. I couldn’t remember how to solve basic math problems, and I tried, but failed the test. The failure made all the progress I made feel like nothing.

My depression and anxiety were back in full force. I began doing anything to avoid going to class. The stress wasn’t good on my body physically as well. My blood pressure was at 164/104, at only 26. I would lay in bed and just watch YouTube videos to get my mind off my physical and mental pain. YouTube recommended some videos about how to DIY with items found at the Dollar Store. I realized there was a Dollar Store close to the Library. I made a deal with myself that I’d only go there if I went to class. I’d take a Lyft, the bus, or get a ride an hour before class to the Dollar Store and after I’d walk to class. That little routine made me feel better about myself, and I felt like I was doing something with my life and time.

I signed up for my civics test and studied and studied. I went in and realized it was identical to the practice test, and I passed with plenty of time to spare. I still wasn’t confident enough to sign up for my social studies test. After a few more weeks, and more encouragement from everyone around me, I finally decided to take it. I passed!

All that was left was math. I did everything to avoid focusing on it, because I was so worried about it. There were times I was so embarrassed and ashamed that I just wasn’t getting it. I lied. I told you I understood when I really didn’t. You once told me to take baby steps so I did.

I started from 1st grade on Khan Academy and did every lesson. There were times I would have two tabs open—one with what I was really doing and one with something I thought you’d think I should be doing. I hope you understand that it was my own shame and lack of confidence, nothing you did as a teacher. When I finally got to the 5th grade lesson plans on Khan and would participate in the last hour of class I began to notice I was finally understanding what you and the class were working on.

When I signed up for the test again, I did it because I wanted to see how far behind I was and to get more of an understanding of what I needed to work on. I went in expecting to fail. Everything you had been teaching me in the class all came back. I could hear you telling me I was making it too hard, and it was easier than I thought. I came out feeling less tense, but still expecting to fail. I got my results 15 minutes later. I passed. I officially had my GED.

Although I still get nervous, I feel good. It took me 2 1/2 years with continuous studying and 4 years from start to finish. I shed so many tears in those four years, but it was truly worth it in the end. You, my case worker, and my senior center boss, were sources of inspiration for me. You all exhibited the strength, compassion, and confidence I desired.

I spent a majority of my young adult life wishing for a better life, but too afraid of failing to ever even try. Life after GED is great. Having my GED has given me more than I thought it ever would. I can honestly say it’s made my life better and given me the confidence I always wanted… and deserved.

Did you know we're offering virtual GED classes? You can find them here.