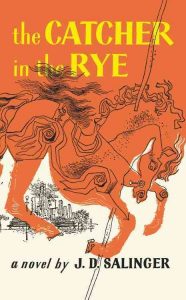 The Catcher in the Rye by J.D Salinger is a must-read for everyone. It is one of the books that your high school teacher will force you to read, but also one that stays with you for a lifetime.

Holden Caulfield, our "hero," is a 16-year-old boy with a very muddled mind. He is teetering on the edge of the cliff between childhood and the adult world and this is obviously taking a toll on him. Since the death of his brother, Allie, Holden hasn't been able to properly close his right hand. He carries around an old baseball mitt with poems written all over it that his brother owned.

The story starts with Holden retelling the story to us from somewhere he is receiving treatment. Beginning in his old school, Pencey Prep, he introduces us to Stradlater and Ackley. Since he got expelled from Pencey, Holden decides that it would be a wonderful idea to leave 3 days early and roam the streets of New York City. The novel follows Holden as he tries to tell his story to passersby and eventually goes to meet his sister, Phoebe. As the plot goes on, we continually delve deeper into Holden's mind.

I was disappointed when I first read this book, but on my second go-around, I began to appreciate Holden and his story. It was a story that I could relate to in some places, although not everyone would be getting that same reaction. I felt like I understood him and wanted to delve into the depths of his mind more. Salinger's writes the story in such a way that it leaves you thinking that Salinger may have actually been an angsty 16-year-old boy. The entire book's filled with double meanings, making you read in between the lines to quench your curiosity. With a relatable writing style, The Catcher in the Rye will leave you with no words to say. It's a book to be reread again and again, a classic that only gets better with time.