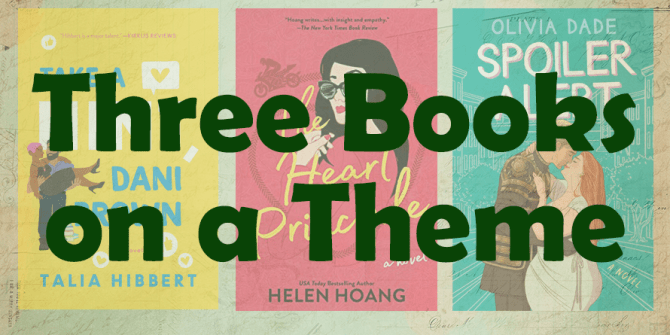 At some point, romance authors decided that instead of writing their books in a sort of non-existent side world in which modern technology had no impact on their characters’ lives, they would write stories that not only embraced that technology, but took advantage of it. One way that I’ve seen it happen in a super fun way is to make their protagonists go viral in some way, either as individuals or as a couple. This experience offers the drama of sudden fame and sometimes for our lovers, forced proximity, one of my favorite tropes. It adds an element to their potential courtship that makes things a little complicated, both externally and within their personal interactions.

Here are three great books I’ve read in which a viral internet thing brings about an HEA.

Dani Brown is a doctoral student with witchy tendencies who wants to get her work done, meet her heroes, and maybe have a little fun. She also likes to stop and talk to the handsome, clever security guard in the building where she teaches. When an emergency leads to him rescuing her from being trapped into an elevator and then carrying her to safety, they become the next big thing on the internet. And it would be useful to both of them to use that popularity; they just have to pretend to date. No big, right?

Rep: Dani is a cis, bi, fat Black woman. Zafir is a cishet man of South Asian descent with anxiety.

The Heart Principle by Helen Hoang

In this case, the viral bit happens before the start of the book, but still acts as the catalyst for the main character, Anna, to think about what she wants in life and sometimes not be able to reach for it.

After a viral video of her violin playing gets the attention of a bigshot composer, Anna finds herself in a rut. She’ll never be able to play again as well as she did that night, and her rut is branching out to other parts of her life. When her (pretty terrible) boyfriend asks for an open relationship, she agrees, and surprises herself with the idea of dating elsewhere. When she meets Quan on an app, they agree to a hook-up, but a series of mishaps lead to them getting to know each other much better online. But a family crisis leads to Anna’s focus being shifted, yet again.

There are a lot of feels.

This was one of my favorite reads of 2020. There’s also a sequel!

Geologist April is a huge fan of the popular television show Gods at the Gates. So much so, that she and a person she has never met co-write fanfiction and facilitate a group of fans. When she decides to post a photo of herself cosplaying a character on the show on Twitter, it picks up a lot of traction. To be expected when a fat woman does anything that indicates she’s not ashamed of her body. What she doesn’t expect is for Marcus Caster-Rupp, the sexy star of the show, to defend her online and offer her a date—where he realizes that April is the person he’s been writing fanfiction online with for the past few years. Yes, folks, it’s a twist! But he can’t tell her that, can he? He can’t tell anyone.

Looking for more love stories, no matter what social media has to do with it? Check out our romance genre page!

*Going with the current conversation on content and trigger warnings, I’ve started to use the term Content Notes covering both features that could be triggering and content that people might be looking for, including tropes and themes.