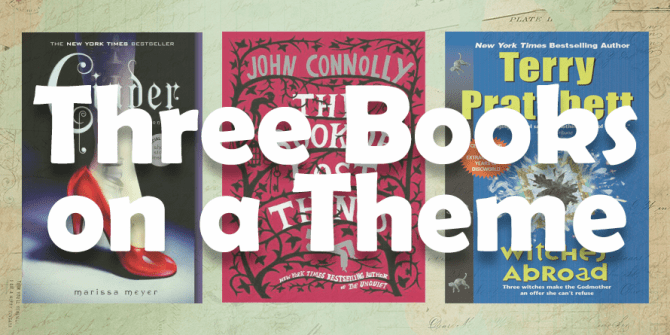 We all know the story of Cinderella, her pumpkin, her shoe, and her prince. Or Little Red Riding Hood and the wolf with the long ears and big teeth. Many people have been hearing these classic stories since they were young children. But, as with most stories we’re quite familiar with, there is something intriguing about asking…what if it all played out a little differently? What if Cinderella was a cyborg or the girl didn’t want to marry the prince? Each of these books delve into a twisted, often dark, take on well-known and well-loved fairy tales. Happily-ever-after never quite looked like this before…

Cinder is a cyborg in a society where they’re discriminated against and mistreated, a plague is ravaging the planet, and tensions are mounting between Earth and the Moon. More than just her own personal happy-ever-after rests on Cinder’s future.

Only the first in The Lunar Chronicles, a four book series (plus a novella, one short story collection and a graphic novel series), this sci-fi epic twists and retells many fairy tales during the course of the series. Inventive and imaginative, Cinder is a gripping read that builds a fascinating world that will have you reaching for the next in the series.

The Book of Lost Things

A twelve-year-old boy, still grieving for his mother, is angry and resentful when his father remarries. Alone in his room, he takes comfort in his book, and then the books start whispering…

He soon finds himself in a dark fantasy world, with familiar tales twisted and bent.

The Book of Lost Things can be dark and grim, sometimes frightening, but with a streak of beauty running at its core. It delves into themes of loss, distrust, perseverance, and hope even within the darkest moments of life.

Make sure the girl doesn’t marry the prince! Seems like easy instructions to Magrat Garlick, a witch who has just inherited the title of fairy godmother. After all, lots of girls don’t marry princes. But someone is messing with stories and the happy ending might not be as obvious or as simple Magrat hopes.

Terry Pratchett’s writing is always hilarious, nuanced, and clever. Here a master storyteller tackles the power of stories and happily-ever-after. Also featuring Granny Weatherwax and Nanny Ogg, two of his best characters, the book is entertaining, charming, and thoughtful.