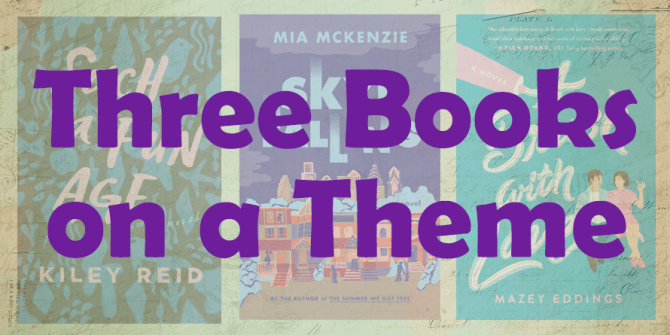 Once upon a time, so many books I read took place in New York. If I was lucky, maybe I could branch out to London. Then, with the increase of movie and music stars, we branched out into Los Angeles. And of course, there are all of those small town stories set in some lovely rural area that might exist or might be a composite of places the author has been. But do you know what city has been feeling the love, recently?

(Note: all three of these books have a long list of content notes based on a great deal of trauma from childhood and present day but they are all very fun and funny.)

This novel is a trip and a half! Skye is an incredibly messy woman who owns her own business and doesn’t think she needs friends (except her ride or dies, anyway) or family (the one she admits exists, anyway). She doesn’t spend much time in her hometown, mostly just what she needs to crash and recover between her expeditions all over the world. But on this particular visit, she gets multiple rude awakenings and might even end up with a new kind of family—blood and found.

Rep: Skye is a cis Black queer woman in her thirties who reads as neurodivergent.

Such a Fun Age

This is a similarly messy book about two women from very different walks of life. Emira works as a more-than-babysitter-not-quite-nanny for Alix’s adorable young child, and they have a great relationship. When a racist encounter rattles Emira, the two women go down a path that neither of them expected. Both cutting and hilarious, this book dives into the ways life does and doesn’t work out sometimes. The experience of reading this on audio was one like no other, as the narrator has such an amazing grip on both of the point-of-view characters.

Rep: Emira is a cishet Black woman in her twenties.

A Brush With Love

Okay, after reading those two, you might want something a little more light hearted, amirite? A Brush With Love is a contemporary romance novel featuring two dental students who have very different views of dentistry and life. Harper has wanted to be an oral surgeon since childhood, and she’s almost there. What she doesn’t need is a man with whom she has incredible chemistry getting in her way of graduating with flying colors and getting her dream residency. Dan, on the other hand, has only just returned to Philly to start dental school at the request of his mother, who is struggling with the practice she’d managed with her superstar dentist husband until his death. The two start on the wrong foot entirely, but become friends and confidantes. But life, expectations, and a boatload of anxiety can get in the way of love.

Philadelphia is home to lots of people, like producer, drummer, Oscar winner and author of Music Is History Questlove. I hope to keep seeing their stories in fiction!