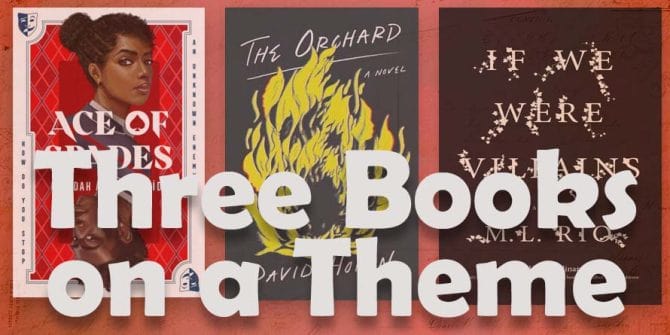 Do you like dark, atmospheric books set in the world of schools or universities? Stories about literary obsession, privilege, cliques, and murder? You might want to try some titles under the subgenre of dark academia!

Dark academia can cross a variety of genres and doesn’t have a firm definition. It is often more of the feeling in these stories that invokes the label. Most of the books I have read in this subgenre focus on an outsider character who is drawn into a privileged inner circle of friends that is obsessed with a secret or text… Often with tragic consequences.

Many people trace the rise of dark academia’s popularity to The Secret History by Donna Tartt (published in 1992), but even a book as old as Mary Shelley’s Frankenstein (1818) can be found shelved hundreds of times under user-created tags for dark academia on Goodreads.

Despite its popularity, a valid criticism of dark academia books has been its lack of diversity. If you enjoy this type of book, challenge yourself to seek out diverse creators and encourage publishers to expand the kinds of stories they promote.

Ready to get started? Try one of these three titles!

In this YA thriller, things take a dark turn when the only two Black students (Chiamaka and Devon) are chosen to be Senior Prefects at a prestigious high school. Devon thinks it is a prank at first, but an anonymous, threatening texter called Aces seems to have all the dirt on both him and Chiamaka. Will the two students be able to team up in time before it is too late?

When seventeen-year-old Ari leaves his Orthodox Jewish community in Brooklyn to move to Florida, he is thrown into a whole new world—a world of drugs, parties, sex, friendships, secrets, and a deep passion for literature and Jewish texts. All of his assumptions about religion, philosophy, life, and love are tested during the pivotal, tragic year before college.

If We Were Villains

Oliver and his six peers are studying acting at an elite college, where they find that the plays of Shakespeare echo tragically into their own lives. After the primary and secondary cast members change rolls (hero, villain, etc.), one of them ends up dead. Oliver, who has done ten years of jail time from the crime, finally recounts what really happened.

Looking for even more titles? Try this list here:

These books cross a variety of genres for both teens and adults, but all fall under the subgenre of Dark Academia.