This blog post is brought to you by PCPL team member Naomi L. from our Caviglia-Arivaca Library. 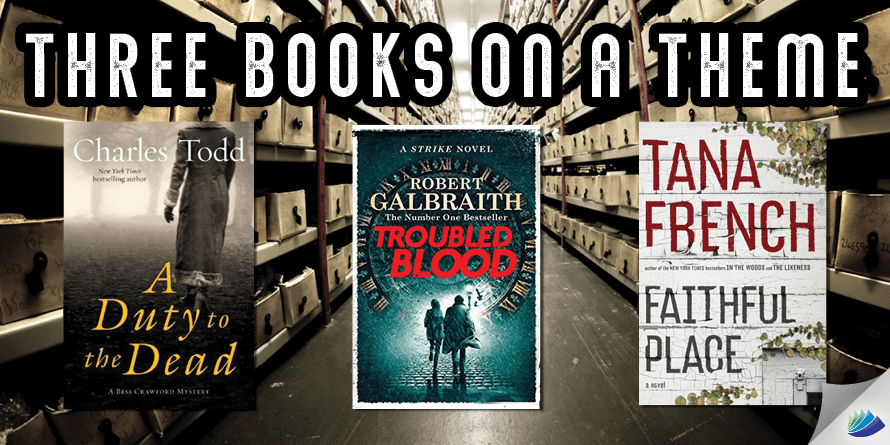 There is nothing like a good murder mystery! However, when the detectives are digging into the past, asking questions about a decades old case, there is an extra element of suspense and uncertainty. It feels more enigmatic and impossible. Memories are vague, suspects are missing, and evidence is long gone. Each of these books involves a murder from the past and the people who start digging into it.

A Duty to the Dead by Charles Todd

Bess Crawford is a nurse during World War I. While on leave, she finds herself delving into the past and one family’s dark secrets, when a man escapes from a lunatic asylum and seeks out her help to answer the question that’s haunted him since he was a child: what happened the night of a bloody murder that saw him locked away for life?

A gripping novel, the mystery will keep you turning the pages, but it is the two main characters of the book that will stick with you long after you’re done reading. Bess is determined and principled, with a strong sense of right and wrong, while Peregrine is dark and broody, but with a thirst for the truth.

Private detectives Cormoran Strike and Robin Ellacott, are hired to investigate a woman's disappearance that happened 40 years ago. How do you investigate a crime where half the witnesses have died and the other half have long since gone their separate ways?

It is a cobweb of clues, leads, and theories, as Cormoran and Robin dig through scraps of the past and try to determine what is important and what is not. It’s a fascinating jigsaw that’s both mystifying as you watch it get put together and satisfying when you see the final result.

When he was nineteen, Frank made plans to run away with his girlfriend Rosie, but she never turned up and was never seen again. Frank assumed she left him. Twenty-two years later Frank is a police detective, when Rosie’s suitcase from that night turns up, stashed in an old abandoned building, forcing Frank to return home and ask questions about what really happened all those years ago.

If you could turn a wistful Irish ballad into a book, it would be Faithful Place. Set in Dublin, the book has a vivid sense of place and setting. It treads a careful line between bleak and hopeful, the shadows of the past and the promise of the future. The third in the Dublin Murder Squad series, the book can easily be read as a standalone novel and is in fact one of the best in the series.