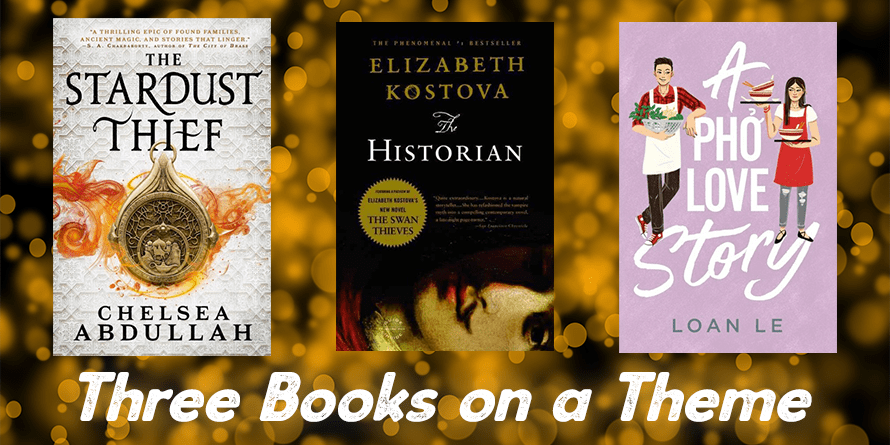 There is something both intriguing and welcoming about a book that takes a familiar and well-loved story and turns it on its head, be it by modern retelling or asking ‘what if’? It is like discovering a new side of a dear old friend.  From romance to horror, these books cover a range of genres, as each author gives their own take on a classic book, play, or legend.

The Stardust Thief by Chelsea Abdullah

A thief meets the sultan’s child, and is sent on a quest full of magic, genies, and mysterious lamps. Sound familiar? Only this time the thief is also a successful merchant of magical artifacts, the genie is her loyal bodyguard, and the sultan’s son is tagging along on the quest while disguised as his bloodthirsty older brother.

The first of a new trilogy, The Stardust Thief is both a retelling of Aladdin but also a mashup of various other stories from the Arabian Nights, resulting in a creative, magical fantasy world built on a long-standing feud between the jinn and the human world. With a creative system of magic and an engaging, colorful cast of characters, The Stardust Thief is absolutely enchanting and will leave you eager for the next installment.

The Historian by Elizabeth Kostova

What if Bram Stoker's Dracula was based on fact and the legend of the true Dracula could be found weaved throughout history? The Historian is an epic tale of suspense spanning continents, decades, universities, and archives, as a young woman follows in the steps of her father down through some of the darkest periods of the past.

Full of beautiful descriptions of exotic locations, mouthwatering food, and a seeping dread, The Historian is an experience as well as an engrossing read. Revealing its detailed, interwoven story bit by bit, it is a novel you sit with rather than rush through.

This sweet, cute, and endearing romance deals with ideas of confidence, following your heart, and the importance of family communication. Staring a sweet hero full of self-doubt and lack of belief in himself, and an artistic heroine full of ambition and conflicting parental expectations.