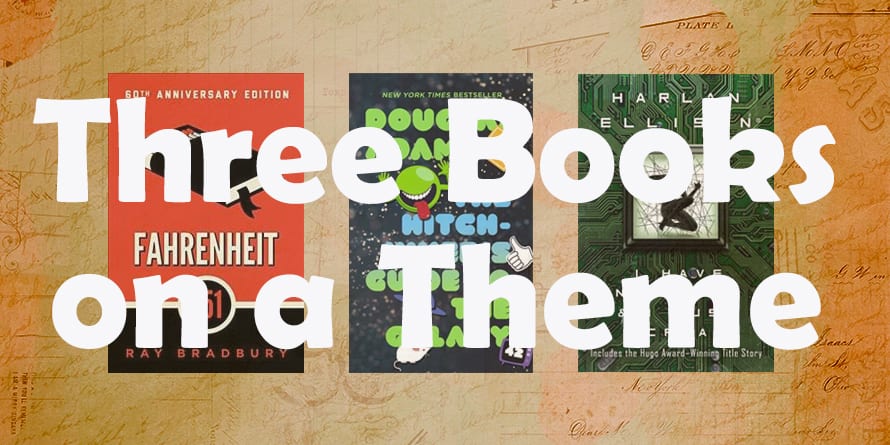 I’ve always been fascinated by the early history of video gaming. It’s endlessly interesting to me that upon being confronted with new technology, humans immediately started trying to figure out ways to play with it.

And what could be better than designing your own game based on your own novel?

So… that’s just what these authors did! All of these games have free versions that can be accessed via any browser – so you can stop by the library to grab the book and also play the game!

I’m sure many of us are familiar with Ray Bradbury’s tale of a totalitarian regime that has ordered the destruction of all books via book burning. But did you know that there’s a video game based on Fahrenheit 451, or that Ray Bradbury wrote part of the game’s script?

The game is set five years after the book’s end and shows what happened to the novel’s main character, Guy Montag. The game is from 1984, and is available to play here.

The Hitchhiker's Guide to the Galaxy

This is my personal favorite of the three books and games I’ve featured here. Adams’ humorous story details what happens to the Earth after it’s demolished to make way for a hyperspace bypass, and especially the many misfortunes of its main character, Arthur Dent.

Douglas Adams’ prose is very good and so it’s fitting that the video game he helped design, also from 1984, is a text based adventure. In it, you play as Arthur Dent, from the moment he wakes up in the morning on the day the earth will be demolished. Be warned, it’s hard! You can easily lock yourself out of winning if you forget to do minor things like buying peanuts. Checking out a copy of the book before diving in definitely helps here! The game is available here.

I Have No Mouth & I Must Scream

Last but not least, we have Harlan Ellison’s tale of a sadistic computer, AM, and the ways it tortures the five humans it’s deliberately kept alive in an underground complex after the rest of humanity was wiped out by the AM itself.

Ellison and a partner wrote the script for the 1995 video game based on the story, and he even provides the voice of the computer. It’s a point and click adventure game that asks the player to make difficult decisions about various ethical dilemmas.

The game is available here.

For more books dealing with the end of the world and what comes next, please check out this list. I can’t promise games to go with these, though!

Get started with... Post-Apocalyptic!