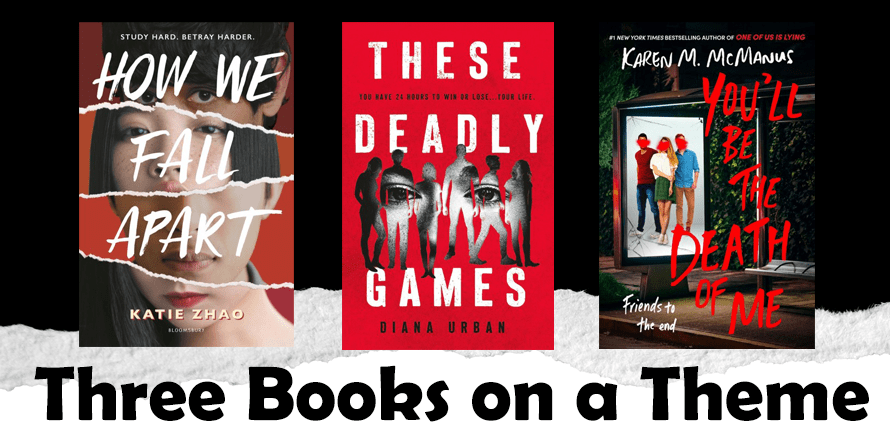 BFFs (Best Friends Forever) take a turn into frenemies – or worse – in some YA thrillers. Whether friends simply fell apart, or a murder shocked their tight-knit group, these teens have to question everything and everyone to find out the truth. Whether Katie Zhao, Diana Urban, or Karen M. McManus are writing, there’s sure to be some drama, twists, and the ultimate question: do we really know our BFFs?

How We Fall Apart

Zhao explores friendship, societal and parental pressures, and secrets in this YA novel. At Richard Sinclair Preparatory School, everyone wants to be on top, but only Jamie Ruan holds the crown – until her father is imprisoned for embezzlement and she goes missing. The latest app, Tip Tap, has an anonymous tipster named The Proctor, who has named four potential suspects in Jamie’s disappearance. Nancy, Akil, Krystal, and Alexander were all once inseparable with Jamie; until an incident occurred that none speak of today. Is this what drove one, or all, of them to want Jamie gone? Or is The Proctor truly the guilty one? With a predominately Asian-American cast, Zhao weaves together a puzzle that highlights the diversity of the culture within a genre that is still trying to find a diverse footing. Great for fans of Natalie D. Richards and Karen M. McManus.

An incident kept this group of friends close together, but do they really know each other anymore? Crystal Donovan wants nothing more than to win the Mortal Dusk competition – the money would allow her family to start over after her father left. Little does she know, though, that her life is about to take a 180 degree turn when she receives an anonymous video of a stranger who wants her to play their game. The prize? Her sister’s life. Will she make it in time, and what will it cost her and her friends to win? Urban keeps you guessing until the very end of this fast-paced thriller with frenemies at its core.

You'll Be the Death of Me

Ferris Bueller’s Day Off meets murder in the latest YA mystery by Karen M. McManus. Three former friends, Ivy, Mateo, and Cal, decide to skip school together on a whim – even though they haven’t talked in years. When they stumble upon a murder of their classmate, their secrets are revealed – including why they really stopped being friends – in order to find out who the murderer is. Twists, lies, and alibis will keeping you hanging on this crazy ride until the end.