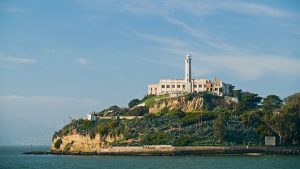 As we approach Thanksgiving, it behooves us to remember the 50th anniversary of the nineteen-month occupation of Alcatraz by the Native American group, Indians of All Tribes (IOAT). Ten thousand years before Americans of European descent spread across what is now known as the United States of America, Alcatraz had been continuously used as a camp and hunting ground. When Alcatraz was about to be declared “surplus” in 1970, Native Americans demanded its return according to the terms under the 1868 Treaty of Fort Laramie.

Bringing to national attention the plight of Native Americans on government reservations and urban settings, the occupation of Alcatraz attracted the support of celebrities such as Anthony Quinn, Marlon Brando, and Creedence Clearwater Revival. President Richard Nixon became “the first and last president that took legislative steps to support Native American tribes.” Under his administration, the culturally genocidal U.S. Termination Policy, which allowed states to dictate the lives of Native Americans at will and sell tribal lands to non-Indians, was ended.

The Termination Policy was cobbled together by the United States government from the 1940s to the late 1960s to force the assimilation of Native Americans. As a matter of fact, the Hoover Commission (“…a group of venerable white men selected by President Harry Truman”) began working in Washington, D.C., to come up with a solution to the so-called "Indian problem.”  Among those who recommended a program of complete assimilation "were congressmen, cabinet officials and pundits.” See more about this here.

The policy was codified by Congress on August 1, 1953—in effect strong-arming the indigenous peoples of the United States to give up their culture, language, self-determination, and ancestral and government-ceded lands in the systemic campaign of Christianizing and “civilizing” a people who predated the Americans of European descent by millennia.

Even religious leaders jumped into the fray, contrary to all tenets of Christianity. Episcopal Bishop Henry P Whipple concluded, “…it was time for the government to cease treating heathen communities…as…independent nations.” 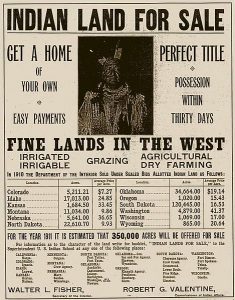 Between 1778 and 1868 at least 368 treaties were negotiated between Washington and various Native nations. According to an article by NPR, Broken Promises On Display At Native American Treaties Exhibit, “More than 370 ratified treaties have helped the U.S. expand its territory and led to many broken promises made to American Indians.” Greed appears to the motivating factor behind the purposeful breaking of the law by Congress and the Senate. Once a treaty is ratified, the treaty becomes the law of the land.

A treaty is defined as an agreement or arrangement made by negotiation; a contract in writing between two or more political authorities (such as states or sovereigns) formally signed by representatives duly authorized and usually ratified by the lawmaking authority of the state.

Unfortunately, the treaties made with the Native American nations were regarded by the men of European descent ruling from Washington as inconveniences readily dealt with by passing laws to favor white Americans. This “legitimization” of outright thievery and cultural genocide was reflected in the 1903 Supreme Court of the United States’ Lone Wolf v Hitchcock ruling which allowed that Congress had the inherent power to repeal existing treaties the government had made with the original Americans.

The latest example of bad faith and complete disregard of a treaty was in 2016 at the Standing Rock Reservation which spans North and South Dakota. Turning a blind eye to the terms of the 1851 Treaty of Fort Laramie, which guaranteed that “the Sioux could retain portions of five states,” the U.S. Government authorized— despite court filings and protests by the Sioux—the Dakota Access Pipeline.

Because of the sacrifices made by the brave men, women, and children who fought for their freedom by staking claim to Alcatraz, a piece of their ancestral land, President Nixon started 50 legislative bills that tripled tribal funding and pushed for tribal autonomy, and recommended ending the Termination Policy. In 1970, he asked Congress to pass a resolution repudiating termination:

On June 11, 1971 a large contingent of federal officers forcibly removed the remaining occupiers of Alcatraz Island and in 1973 Alcatraz opened as a national park and has been one ever since. Since 1975 people have gathered to commemorate Un-Thanksgiving Day each November and to celebrate Native American activism and culture.

The fight continues to protect tribal land, indigenous culture and traditions fifty years after taking the “Rock.” So as people gather to count their blessings, let us hope that we also remember the original Americans’ right to self-determination and full protection under the law—as promised by more than three centuries of legislative action by the government of the United States of America.

Proclamation to the Great White Father and All His People

We, the Native Americans, re-claim the land known as Alcatraz Island in the name of all American Indians by right of discovery.

We wish to be fair and honorable in our dealings with the Caucasian inhabitants of this land, and hereby offer the following treaty:

We will purchase said Alcatraz Island for twenty-four dollars ($24) in glass beads and red cloth, a precedent set by the white man's purchase of a similar island about 300 years ago. We know that $24 in trade goods for these 16 acres is more than was paid when Manhattan Island was sold, but we know that land values have risen over the years. Our offer of $1.24 per acre is greater than the 47¢ per acre that the white men are now paying the California Indians for their land. We will give to the inhabitants of this island a portion of that land for their own, to be held in trust by the American Indian Affairs [sic] and by the bureau of Caucasian Affairs to hold in perpetuity—for as long as the sun shall rise and the rivers go down to the sea. We will further guide the inhabitants in the proper way of living. We will offer them our religion, our education, our life-ways, in order to help them achieve our level of civilization and thus raise them and all their white brothers up from their savage and unhappy state. We offer this treaty in good faith and wish to be fair and honorable in our dealings with all white men.

We feel that this so-called Alcatraz Island is more than suitable for an Indian Reservation, as determined by the white man's own standards. By this we mean that this place resembles most Indian reservations in that:

1. It is isolated from modern facilities, and without adequate means of transportation.

2. It has no fresh running water.

3. It has inadequate sanitation facilities.

4. There are no oil or mineral rights.

5. There is no industry and so unemployment is very great.

6. There are no health care facilities.

7. The soil is rocky and non-productive; and the land does not support game.

8. There are no educational facilities.

9. The population has always exceeded the land base.

10. The population has always been held as prisoners and kept dependent upon others.

Further, it would be fitting and symbolic that ships from all over the world, entering the Golden Gate, would first see Indian land, and thus be reminded of the true history of this nation. This tiny island would be a symbol of the great lands once ruled by free and noble Indians.

Discover more: 50th Anniversary of the Native Occupation of Alcatraz