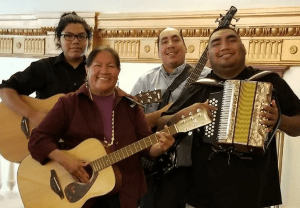 Great news! Gertie Lopez, longtime friend of the Library, was recently inducted into the Tucson Musicians Museum's Hall of Fame.

According to a press release, "Gertie Lopez is a leading force in the performance and preservation of Tohono O’odham culture and music in Arizona and Mexico. She is currently with the San Xavier District of the Tohono O’odham Nation and manages the San Xavier Learning Center Tribal Library, where she teaches, tutors and mentors Tohono O’odham of all ages. Gertie teaches beginning guitar and provides guidance in all aspects of music for advanced students. In 2015 Gertie received the “Outreach Service Award” from the Arizona State Library Association. She and her band, Gertie and the T.O. Boyz, have also placed first in the Gila River Reservation “Battle of the Bands” in 2011, 2011, 2012, 2013, 2015 and 2018."

Find a copy of Waila Music by Gertie and the T.O. Boyz at your library!