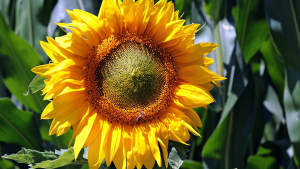 Wild sunflowers (Helanthus annus) have been setting seeds for thousands of years in northern America. Not surprisingly, helia means sun and anthus, flower. Sunflower fossils have been found along the Mississippi River watershed dating back 9,000 years and by 4000 BC these oily seeds were intentionally cultivated throughout the lower Midwest.

Mammoth Sunflowers are giant annuals and one of the fastest growing plants in the world. The stocks can reach up to 12 feet in height. The large head, which can grow to the size of a dinner plate, resides on the end of a thick stock and is surrounded by yellow petals. Sunflower plants and their seeds have increased over time as humans selected seeds from the strongest plants each growing season. The tallest sunflower was grown in the Netherlands in 1986 and reached a height of 25 feet and the flower head grew to 2.5 feet in diameter!

Sunflower cultivation dates back farther than even corn, squash or beans – the three sisters. Historically, the entire sunflower had been used by Native Americans. The stalks were peeled into thin sheets and used like paper. The flower petals and roots were cooked as vegetables and sometimes the empty seed compartments could be repurposed as dye or paint containers. Archaeologists have found the remains of sunflower seeds in Indian dwellings going back to the year 800 and it appears that sunflower meal was used to make bread. Today, striped seeds can be consumed by humans and animals and the black seeds pressed for oil. This fatty, yet healthy, snack has high amounts of vitamin E, lots of calcium and other important minerals.

Many varieties of sunflowers are heat and drought-tolerant and they’re great at bringing insects and butterflies to your garden. While sunflowers look like one big flower, the head is actually made up of 1,000 to 4,000 florets, which open for just two days for fertilization. They have perfect flowers, meaning they consist of male (stamens that produce pollen) and female reproductive structures called pistils. However, they can’t be pollinated by their own pollen. They need the pollen from neighboring sunflowers (ideally, of the same variety) and they often rely on insects or human manipulation to transfer pollen for seed-saving purposes. Since sunflowers can be cross-pollinated, if you intend to save seeds from your plants, make sure you’re growing only one variety at a time.

The spiral design of the seed head is mesmerizingly efficient. The National Museum of Mathematics tells us that if you count the spirals on a sunflower, you’ll come up with one of these Fibonacci numbers (each number is the sum of the two preceding numbers: 0,1,1,2,3,5,8,13,21,34,55,89, etc.). Nature is never short on nerdy revelations. Artists, writers, and botanical enthusiasts have always been entranced by sunflowers because they seem to be moving their heads to follow passers-by. Sunflowers are heliotropic, meaning they move so the flower head faces and follows the sun east to west throughout the day and then back to east in the night, ready for the morning light. However, by the time stocks thicken and the tiny flowers begin to form seeds, their position is secure and they no longer follows the sun. Nevertheless, these giant beauties trick us into thinking they’re watching us.

Library cardholders can check out up to 10 packets of seeds per month at the Pima County Public Library. If your local branch doesn’t have sunflower seeds on hand, you’re welcome to ask at the desk or place a hold on seeds through the library’s online catalog!

Native to the Americas, sunflowers are best sowed in the desert Southwest between March 15 and June 1 and they’ll germinate within five to ten days. If you prefer to start your seeds early indoors, use peat pots in order to avoid disturbing the roots. Transplant outdoors after the last frost and make sure to place the top edge of the peat pots down a bit below the top level of the soil. Alternatively, you can simply sow the seeds directly into the soil in a sunny area ¼ to one inch deep after the threat of frost has cleared. Sunflowers don’t like the cold! You want to make sure the seeds are a foot or two apart to give them ample space to grow. Their roots are long and need to stretch, so they prefer loose, well-draining soil. You may need to augment with some sand and compost because they’re heavy feeders and need lots of nutritious organic matter. During the monsoon season, the stocks may need to be staked to avoid damage. Another good strategy is to place the seeds near a fence or the side of a building to shelter the plants from strong winds.

Sunflowers need average watering and will mature in about 90 days. Water three to four inches out from the plant at the roots when the plant is small. Once established, you can water more deeply to encourage deep rooting. When you’re ready to harvest for decorating, cut the stems early in the morning before the flower buds have had a chance to open. Tall containers are best to support the heavy heads, which will bloom for about a week if you change the water daily.

For those of you who want to save the seeds, let the sunflower dry on the plant until you see the back turning yellow and the bracts turn brown. Bracts are those little leafy things that live near the stem. Some folks put seed head netting covers or pillow cases over the flower to prevent birds from stealing your precious seeds. Wait a few more weeks and then cut off the head. Alternatively, you can hang it up indoors in a well-ventilated place for a few weeks. The seeds will be dark and rub off easily when they’re ready. Spread the seed head face down on cardboard to dry for another few days. Pick out a seed and squeeze the ends. When the seed splits into two halves under pressure instead of bending, it’s dry enough for storage. Place the seed head face down on a sheet and gently beat the back of the head with a stick. Gather the shells and store in a cool dry place. Sunflower seeds will remain viable for up to seven years. Humans prefer them roasted for eating, but you can scatter unroasted seeds out in your yard for the birds.

Ready to roast? Rinse a cup of sunflower seeds in the shell, removing any debris. Mix the seeds with one quart of water and two tablespoons of salt in a pot and bring to a boil. Simmer for one to one-and-a-half hours, strain seeds in a colander and then spread on paper towels to dry. Do not rinse again! Once dry, preheat the oven 325 degrees and spread the seeds on a cookie sheet to bake for 25 to 30 minutes, stirring frequently. Remove when the seeds are slightly brown. Enjoy!