With the kids at home and doing remote schooling, it might be difficult on some days to get them interested in learning. One thing to remember—kids are more willing to learn about topics they are interested in.

For example, if your child likes the Star Wars movies, then try using those movies as a bridge between what they know and what they need to learn that would be helpful in school. Keep in mind this learning doesn’t have to lead anywhere—it can be simply for fun! Learning for the simple fun of it is very rewarding, for kids and adults!

In all the Star Wars movies, the characters move around in spaceships, sometimes ‘jumping to light speed’, which allows them to travel the immense distance of light years. Is that even possible? Have scientists studied this? If so, what does the future look like for space travel? We have found videos, done by scientists who delve into this topic. You could have your child watch a few to get an idea of the science behind light-speed travel. On the other hand, if they are intrigued by the actual space ships, there are books and videos about not only the ships they use in Star Wars, but also about our actual, real-world spaceships.

Nerding out on Star Wars Science

How Do Hyperdrives Work and Can We Build One?

The Stellar Story of Space Travel

“If there’s a bright center to the universe, you’re on the planet that its farthest from.” ~Luke Skywalker

Any fan of Star Wars knows that the name of Luke Skywalker’s home planet is Tatooine, and it is a desolate desert. The Star Wars movies introduce kids to the idea of multiple galaxies and planetary systems, all with their own life forms, ecosystems, and commerce. This would be a great segue way into learning about our own solar system. There might not be life on any of the other planets in our galaxy, but we have discovered water on Mars!

“Not as clumsy or as random as a blaster, but an elegant weapon for a more civilized age.” ~Obi Wan Kenobi.

Finally, what Star Wars fan does not love duels using light sabers? The Force is also a favorite among Star Wars fans. George Lucas, the director of the original and prequel movies, was strongly influenced by Japanese samurai movies and culture. If your child likes the idea of the Force and fighting with swords that are considered an extension of the warrior who wields it, they might be interested in learning about samurai culture.

These examples only scratch the surface of what kids could take from the Star Wars universe to create questions about our own world. They could learn about famous empires, rebellions, and more. All they have to do is use their imagination and allow themselves to wonder, “I wonder if that has happened in our world?“ and “is that possible?” 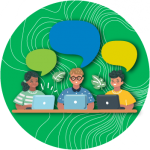 Visit Learn at Home for even more great resources, including: