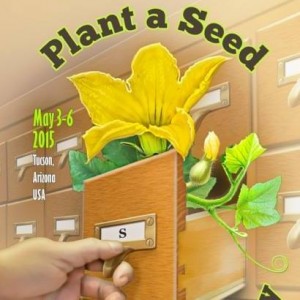 In 2014, the Mechanicsburg, PA Seed Library was shut down by the Pennsylvania Department of Agriculture for failing to comply with State and Federal seed regulations intended for commercial seed companies. This precedent threatened other seed libraries across the country, resulting in a community call to action, which ultimately paved the way to the 1st International Seed Library Forum co-hosted by the Pima County Public Library in May of 2015.

A working group was established at that gathering, it included folks from the Sustainable Economies Law Center (SELC) and other seed librarians across the US and Canada. The SELC, with the help of the group of seed librarians, successfully passed the Seed Democracy Act in California, protecting California seed libraries and small-scale seed growers from the onerous Department of Ag regulations meant for large-scale seed producers.

That group went on to work with the Association of American Seed Control Officials to advocate for releasing seed libraries, community seed exchanges, and small-scale seed growers from the same regulations that large-scale seed companies have to adhere to, proposing a Non-commercial Seed Sharing Amendment, which passed in 2016!

That group of folks eventually formed the Community Seed Network, a bi-national effort to support and advocate for community seed saving initiatives in the US and Canada.

Did you miss out on attending the First International Seed Library Forum?

Our wonderful community partners at the University of Arizona's Bureau of Applied Research and Anthropology (BARA), videotaped many of the seeds of knowledge that were sown there, and have made them available to you. So go grab some locally grown popcorn, put up your feet, and enjoy!