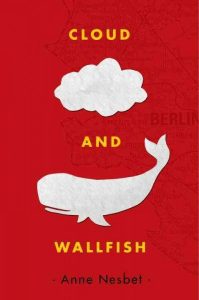 Set in 1989, Cloud and Wallfish by Anne Nesbet is wonderful to read from start to finish. The protagonist's name is Noah. Sorry, was Noah. Now it's Jonah. Noah, torn out of his normal life in Virginia, relocates to East Berlin (this was when the Berlin Wall still existed) with his parents and discovers that everything he knows about himself isn't true-- his name, his age, even who his parents actually are. Well, his parents are still his parents but suddenly they have this whole other identity that Noah didn't even know about. His mother is making them move to East Berlin under the pretense of studying for her Ph.D. by observing children with speech impediments. Noah has no warning. He's just suddenly whisked away into this story of adventure and friendship while getting through his new life with his own speech impediment--a stutter. Now don't get me wrong, this stutter doesn't make Noah any less brilliant, he is a young intelligent boy whose mind is incredibly observant and moral. Immediately after finding out all this information about himself and his parents, Noah must learn a new language, a new set of names, and remember his own made-up life in order to protect himself. And in East Berlin, Noah must remember one important thing-- not to ask any questions or do anything out of the ordinary. Why? Because he's always being watched.

Set during the Cold War, East Berlin is in a state of fear and secrets. Noah must now adapt to this new environment that's very cold and unwelcoming to anyone that is not similar to the other people. And it is this time that Noah finds solace in a girl, Claudia, that lived on the floor below his. She has had her own share of struggles in East Berlin and imagines what life could be like just Beyond the Wall. Their imaginations combine to take them away from the fear streaked world they lived in to places of wonder. With all the secrets and lies that surround him, Noah must find some way to remember who he was and to understand what to do next, and through all this he gets something he didn't bargain for--a true friend.

Nesbet craftily recreates East Berlin in the viewpoint of a 10-year-old boy from the U.S. The book was entertainingly written and informative at the same time. When you think of historical fiction, I often think boring and that's certainly not Cloud and Wallfish. This book was a wonderful read with a thoughtful protagonist, a good setting, and incredibly fascinating but mysterious parents. I would recommend it for anyone that is up for a well-written read!