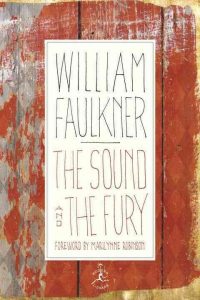 As a preface to this review, I want to point out that this book was one of the most challenging novels I have ever picked up. Faulkner alone produces mind boggling stories, but in The Sound and the Fury, his literary skills outshine many other authors who attempt this style of writing.

The Sound and the Fury, to put it briefly, is about the Compson family, whom live in the south during the late 1920s. The book is divided into four parts, the first three as a first-person narrative, and the final being narrated by Faulkner himself. The novel follows the 3 sons in the Compson family who, while their personalities differ immensely, share a common obsession with their sister, Caddy. Caddy is often seen as the catalyst of the events occurring in The Sound and the Fury, though for much of the novel she is not present. Throughout each section, we delve deeper into the minds of the characters: Benjy, an insufferable man child, Quentin, the proclaimed neurotic suicide, and lastly, the viscous Jason.

In my experience, the most difficult chapter to read was, surprisingly, the first one. I found it unbearable, almost to the point of putting the book down and never thinking about it again. Finishing this chapter itself was rewarding, and I found the will to continue reading, despite knowing how troublesome another of Faulkner’s works (As I Lay Dying) was for me. I can honestly say that this novel has a place in my top five; Faulkner’s ability to cloud past and present and introduce a writing style I had never encountered before: a stream of consciousness in narrative. I would highly recommend this text to anyone who is a Faulkner fan, but also to individuals who wish to expand their bookshelves with classic, yet challenging literature. I would recommend listening to the audiobook narrated by Grover Gardener while reading along. Gardener has the ability to bring to life each character’s personality, which made reading this novel much more pleasant!

Lastly, if you finished this book and have become a fan of reading about the Compson’s misfortunes, Faulkner’s Absalom, Absalom! involves two characters from The Sound and the Fury, and is the next book on my list

-Brooke, (Dusen)Berry Blogger and member of the River Teen Advisory Board